not guilty (by reason of insanity?) 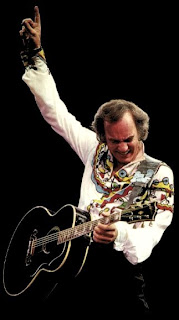 I woke up with Neil Diamond's "I Am...I Said" in my head the other day. Before I move on, let's all listen to that together so we're in the same place.

Neil can be kitschy but I have to admit I'm a fan, and waking up with this random song in my head (and singing it for the rest of the day) made me think about other "guilty pleasures" in my music selection. These are the ones that for some reason I'd be a little hesitant to list in my favorites. Or I'd worry about my hipster cred, no matter how many PBRs I drank to make up for it, if I did. Then today I ran across this quote:

Honesty is the first chapter of the book of wisdom. -Thomas Jefferson

I want to write that book, Mr. Jefferson. It's time I brought some of my musical skeletons out of the closet. So here we go...

Neil Diamond: You've already heard my confession on this one. Yeah, I know we've all sung "Sweet Caroline" at karaoke and made the occasional joking reference, but I really think this guy is a great songwriter. Come on, he wrote "Girl, You'll Be A Woman Soon," which was badass enough to be covered by Urge Overkill and featured in Pulp Fiction.

He is the "Solitary Man." And, though it started as a joke, because of his contribution to the movie E.T. I ended up with a lamp and string of lights that are pretty special to me now. They look more or less like these. And yes, I do sing "Turn On Your Heartlight" every time I see them.

Bread: These guys may be more familiar to you than you know. They had quite a few big hits in the 70s, playing the kind of rock that makes Celene Dion seem aggressive. Their songs, particularly "Baby I'm A Want You," "Make It With You," and "Guitar Man" have been covered by all kinds of artists. It's sappy, melodramatic silliness, but I can't help loving it. Here's "Diary," one of the saddest songs ever written.

On the flip side you've got "If," which I stand behind as one of the sweetest love songs ever.

George Michael: If I weren't American, I might feel less reserved about this one. Europe seems to have always known the guy's talent and been able to reconcile his ability as a deep soul-influenced singer with his penchant for putting out poppy dance hits. On this side of the pond, or at least in the more rock-centric circles I run in, there seems to be more of a stigma. I finally had to look at myself, hiding in dark corners with my walkman and my copy of Listen Without Prejudice and say, "this is wrong. Be proud, for what the man doth he doth so well. Let him make great pop music!"

Pay attention to the lyrics there. It's actually an emotionally autobiographical story of a young man getting caught up in the industry and struggling to find his own identity as he matures musically. And damn it's catchy.
He's also written some great ballads.

Faith and Listen Without Prejudice are both pretty brilliant albums that should be part of your collection. I find his most recent material more hit-or-miss but the guy is still super talented.

There are so many more but I'll stop here. Maybe I'll revisit the theme later. I invite you to begin writing your own book of wisdom. Shout your guilty pleasures from the rooftops, or even post them in the comments. Go buy the catalog of that one artist you've been running from all these years. Liberate yourself, for music should make us all more free.
Speaking of music making us free (there's a stretch of a segue, but I didn't want to characterize classical music as a guilty pleasure) I want to take a moment to recognize Henryk Gorecki, who passed away a few weeks ago. As a modern avant-garde composer he wasn't for everyone, but his "Third Symphony, Symphony Of Sorrowful Songs" seems to be something most of us can agree on. Dedicated to the memory of Holocaust Victims, it is a stunning piece of work that stands as one of the most moving compositions ever written. It's too long to post here but do yourself a favor: track down a copy and take some time out to listen to it all. It's just...uh...wow.

Listen Without Prejudice is totally in my collection and I agree that Freedom 90 is a really well-written song. I've always admired the song and album.

I'm just going to pretend you never wrote any of that.