Track One is called "Schizophrenia." But it's adorable and perfectly composed, so I don't dial up the head shrink when Jukebox the Ghost skitters through the Yes I can, No I can't, Yes I can lyrics like they are performing warm-up scales at a frenetic pace.

It might be one of the best opening tracks ever to grace an album. It just might be. Jukebox the Ghost has been touring nonstop since 2006 and their second LP is called Everything Under The Sun.

They're a three-piece. You know how much we love three-pieces who sound like half an orchestra around here. And I love a lyricist who can make me smile. 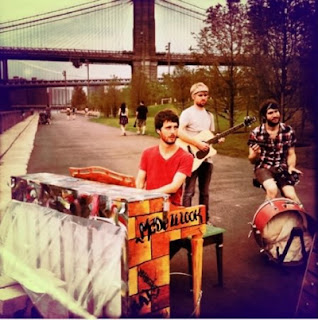 They knew my name,
they screamed and screamed,
they knew everything.

You could say that I'm well liked
but I'll never be friendless...


And now, The Little One is hooked, because you've got upbeat tunes, excellent song composition, a mixture of instruments, and lyrics that help me explain myself to you.

They've played with Ben Folds, Tally Hall, and showed up on David Letterman in September of this year! Woot, boys!

Probably more notable to mention than the tour they literally JUST kicked off with Barenaked Ladies is their appearance at both SXSW and Lollapalooza this year. Yes, that means it's time for you to know about them, since you obviously missed them on NPR's World Cafe Wednesday. Tell your friends. It's like, everything you love about The Mountain Shin Lips in a Death Cab. Isn't it? ISN'T IT.


Quick, buy the album NOW and pretend you've owned it since it was released in September. Buy Let Live & Let Ghosts, too, because that one is a dandy-dandy.