Elvis has returned to the building

How do you keep writing fresh, relevant music after 30+ years in the business? I'm not quite sure, but Elvis Costello has it down. 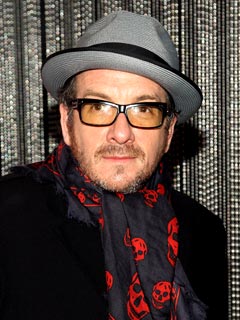 Since 1978's My Aim Is True Elvis (wasn't there another guy with that name once?) has been releasing edgy, intelligently irreverent music. I have a feeling he would have been relegated completely to the underground if he didn't write such catchy tunes. Instead, he has managed to sneak the occasional mainstream hit in over the years while he's busy cranking out great pop-rock albums, delving into jazz music (most notably in collaborations with his wife Diana Krall), and even working up a chamber opera. Sadly that last one never quite came to fruition.


Costello's new album, National Ransom, is a solid release. It's got plenty of the familiar pop-meets-punk-meets-new wave vibe Elvis does so well, with some genre benders thrown in along the way. Here's the opening track, which I would say rocks.

The man's ballads always get me, as well. He's quite the crooner.

Click to play Elvis Costello - You Hung The Moon

And above all, you've got a love a guy who joins Spinal Tap onstage for a classic hit:

Give it a listen. There's a lot to like, even if you're not a die-hard Elvis Costello fan.