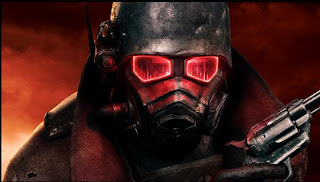 Yes. I am one of those nerds. I loved the music from Fallout 3. I loved the music used in both Bioshock games. The classic songs that bring you back to a gentler, nicer time. Except, well, those games aren't gentle or nice. They're brutal, in fact. And that may be why I love them. Well, now with Fallout: New Vegas? We get more of the classic sounds. Hell, I was so psyched for this game when I saw the initial trailer. It features one of the songs we're posting today. Check it out.

While the game can slog on for points, the pros heavily outweigh the cons, in my opinion. There are a few bugs and glitches, but nothing that really ruins the game experience for me. Hell, just do what people tell you you should be doing - SAVE OFTEN! This game is massive. There is so much to do, and even though I've been playing a lot since the game came out last Tuesday, I still haven't made it onto the strip. Part of the reason for that is I'm more enamored with the Mojave Wasteland. I'll get into the strip soon. I promise.

The music, however, is what I love the most. The trailer above features the track "Jingle, Jangle, Jingle" by Kay Kyser. His big band sounds are featured in this number. Those certainly were the days, eh?

Now the next track is one people probably know. It's hard to make a game about Vegas and not include some mention musically of the Rat Pack. Dean Martin is featured in the game's soundtrack with one of his better known hits - "Ain't That A Kick In The Head". And it fits in the sense that when you start the game? You're not kicked, but shot, in the head. How's that for a shitty day?


Download Dean Martin - Ain't That A Kick In The Head

Now this last one, I had heard before. Living in the South for a while, I guess I couldn't help that. It's not a bad thing. Being exposed to a lot of the old crooners growing up as a kid was a great thing. It helped get me into singers like Louis Prima, for example. Hell, getting to see Sam Butera perform twice (for free!!) while living in Las Vegas years ago was one of the biggest thrills for me. I only wish I still had the picture I took with him. :sadpanda: indeed. Anyhow, this song is one that's featured prominently if you're out in the wasteland. It's by Marty Robbins, and the song is "Big Iron". This is a guy that had the crossover appeal before the alt-country tag was there, I guess you could say. A lot of his songs were played on pop radio, but to be honest, pop radio then mixed genres moreso than it did now. Anyhow, this is a great tune, and it's perfect for the times you're trekking out in the middle of nowhere.

And speaking of Bioshock, have you guys seen the gameplay video for the upcoming Bioshock Infinite? I don't know about you, but I am excited for this one, also. Also, go buy some music. Don't be cheap!