Umm. Should I be embarrassed?

So this is a song that I heard probably only about five years ago, but is quite a bit older than that. It's followed by another song that, well, I have wanted to post for a while, but I have honestly been too lazy to dig through the couple thousand records I have to find it. Records. They're those round things. Made of vinyl. Vary in size. Sort of like dinosaurs. Except dinosaurs aren't made of vinyl. And they're not really round. So scratch the dinosaur comparison. 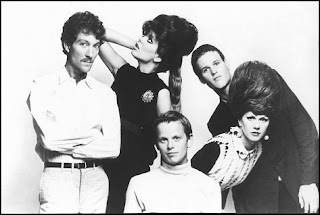 Anyhow, the first track is by the B52s. Yes. I said the B52s. Go ahead. Judge me. I like this song. It's the track "Whammy Kiss" off of their third studio album Whammy. Believe it or not, the EP they recorded prior to releasing this album (Mesopotamia)was produced by Talking Heads legend David Byrne. So yeah. If you've got issues with them now? You're a big fat stupidhead. And I'm twelve. So there. This is a fun track. One you just kick back and enjoy the absurdity of it, and appreciate the old school sounds of drum machines and synths, you'll be happy. So enjoy.

Next is that aforementioned piece I have on wax. Now, back in 1987, Vanessa Paradis - who's now in a relationship with Johnny Depp - released this song originally, and made her big. Well, in France, at least. The hard work paid off in the long run, as she would end up working with music luminaries such as Lenny Kravitz. Well, in around 2000, Japanese artist Hanayo covered the song in question - "Joe Le Taxi" - and was the first track off of her album Gift. I have to say, I prefer this version much more. And now it's here for you guys to take some listening pleasure in!