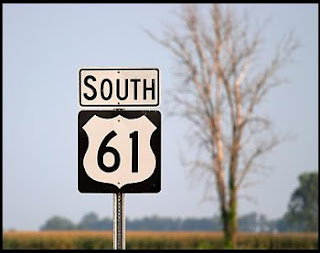 A lot of great basic American culture came right up that highway and up that river.


We're not afraid to tell you about other places to discover music. We know you will be back. You love us!
We are not worried at all that you will check out thesixtyone and fall in love and break our hearts. You would never do that to us. We like that we can have an open relationship where we think it's fine you go and have a "fling" with this other site. They make discovering music a game. We can't do that for you. We want you to have it. After you have had your fun though, you'll come back here. We take care of you. No games here. Just love and music.

"Really? There's love at TheSixtyOne! I can 'heart' songs I like!" you must be saying into your monitor. I'm guessing, because obviously (OBV) I couldn't really hear you.

Alright. That's true. You can heart things at thesixtyone.  Go ahead. Give your heart(s) away. Maybe when you are done you can at least show us you "Like" us.
TheSixtyOne has quests you can complete to get hearts and reputation.  For example, the Caution - Very Hot! quest involves listening to seven songs on the "hot" tab. Complete it and get 5 reputation and 3 hearts to give away to songs you love.


TheSixtyOne leaves the aesthetic of the site up to what you are listening to at the moment. For the most part this is awesome. The band will post some artsy band pic and this really looks cool. Like the page for the reggae band Easy Star All Stars. Sometimes, though, it seems like someone needs a lesson in web resolutions. For example, the UK band The Whip has awesome music, but a shitty looking profile.

The Whip's music is fantastic though. Check out this Electro-Rock smash "Trash" from the album X Marks Destination.


You can even make playlists. Check out my PARTY playlist! I really might use TheSixtyOne as my party music headquarters. I could load up the site on my 46" TV and run the music through my home theater. Imagine how people at the party would love that. If they hear something they like, they just peek at the TV to find out who the band is, and get some info about them. I can even leave out the wireless keyboard and let my guests heart the songs they liked! I think that would be Party 2.0!

(most of my friends are geeks and nerds...so trust me, this would be a hit!)

Lots of your favorite artists are already on TheSixtyOne. Jonathon Coulton? Check. The up-and-coming-selling-out-shows-everywhere Weepies? Yep. They also have lots of indie and relative unknowns getting lot's of love. Just because they are unknown to the masses doesn't mean that a music savvy person like yourself should stay in the dark. You should know about an artist like Subtxt who creates beautifully textured soundtrack-esque music or an artist like Michael Joy who produces some beautiful mellow Americana.

What's the name of the site about? Well, there is a Highway 61 that runs 1,400 miles from New Orleans, Lousiana to Wyoming, Minnesota. It generally follows the great Mississippi River. The highway has a lot of  history attached to it, but what's more exciting is that it was an important highway to music. It was often dubbed the "Blues Highway" and is mentioned in countless songs. Elvis Presley grew up in the housing projects built along it;  Martin Luther King, Jr. would later be murdered at a motel just off Highway 61. Robert Johnson was said to have sold his soul to the devil at the "crossroads" of Highway 61 and Highway 49. Did someone at TheSixtyOne sell their soul? I think so. Be careful you don't spend too much time there. I don't want anything bad to happen to you.

They love music at TheSixtyOne, so I must endorse them. I use them, and I think you should too. Buy some music, visit thesixtyone.com and follow OUR blog on facebook or in your favorite RSS reader.
Posted by mookie at 8:08 AM