Colour Revolt: And Then There Were Two.

Despite the fact that we called Plunder, Beg, and Curse one of the top ten albums of 2008 because it proved that "beards and southern rock are just barely getting started with their comebacks," the album had dismal sales (we were among multiple entities who wrote high praises of the album), and they lost their label, bassist, and drummer. 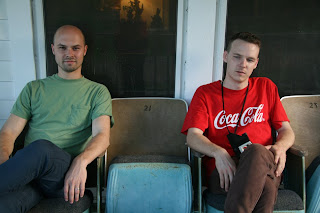 Founding members Jesse Coppenbarger and Sean Kirkpatrick eventually found themselves down to two, and tasked themselves with recording some new songs (they created 40 demos) and finding some new mates.

They did just that, and the wonderful product of such trials is documented in 2010's album The Cradle. Though the lyrics throughout the album address the broken communication in a relationship between a man and a woman, we also get to experience the heartache that a band breaking up causes and the ambiguity that follows.

Check out one of the stronger tracks from this album, "Mona Lisa". Musically, lyrically, it's got to rumble you and make you take notice.

Thrice drummer Riley Breckenridge claims that this album is a lock for his top ten of 2010. The Breeders literally chose them to tour with because of an album listen. St Louis' Riverfront Times claims that Colour Revolt is THE exception to the idea that most bands today would never survive in the 80's pre-internet band era.

So what is going on that all the cool people with great taste love these albums, love these shows, and don't buy the records?

You've got to buy the records, guys! We even give you linkety links when we tell you about the music! How do we keep music coming? How do we support the acts we love without buying their music?

Here it is. C'mon now, sweetness.