You're a Heartless Bastard

As an aside, I'm writing this all while listening to a ton of old house and electronica. The antithesis to what I'll be posting, today. In fact, since I can't find a good audio program on the cheap to rip all my old vinyl, I've resorted to digging around youtube to find some of it. What am I listening to right now?

That seriously could be the best choon Armand did on the remix tip. No joke. That's just some filthy disco goodness. Nice use of low and hi-pass filters to tease everything in, too. I used to kill this track when I dj'ed. Ah, memories.

Anyways, let's get back to what the hell I meant to write about. And before you little hipster snobs start giving me shit, yes, I am just hearing about the band I'm posting today. No, you don't have cred. Stop it. Speaking of hipsters, that reminds me of quite possibly my favorite joke. Ever. I mean, ever. Because it's fucking funny. I love swearing to accentuate things. In my mind, it makes me seem chic without trying. Or just an ass. Take your pick. Anyways:

How many hipsters does it take to screw in a lightbulb?

It's a really obscure number. You've probably never heard of it.

Yes, I think I've made a few people angry, but also a few people have smirked. Hopefully, a few also snorted milk through their nose. If so, send pics. But, uh, yeah. I keep getting off track. The band in question today is Heartless Bastards. I mean, I heard this song "The Mountain" on Saturday while driving into work, and my mind was just blown. It's epic. Seriously. Epic. Say that word along with me, now - epic. Italics are cool, huh? 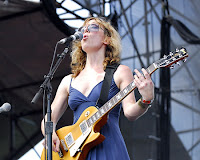 So I guess the former producer of Spoon, Mike McCarthy, produced this latest album, entitled The Mountain. So far? I like what I hear. And today I bring you a couple nuggets of goodness. Seriously. You guys read through a pointless diatribe (I hope) just to get to this point. Oh, and here's also something else I've been listening to. Because holy shit is the video just disturbingly funny. I mean, almost to the point where it's hypnotic. Not Hpnotiq. That's cognac for sissies. This, however, isn't for sissies. And I mean that for both the video and the Heartless Bastards tracks I'm posting.

Yeah. Now music. The stuff you're here for.

Is it bad form to post a link from another blog even though your joke made me think of this video? Well, I'm gonna anyway because that Sandwiches thing really freaked me out: http://bit.ly/a4NDyv

I mean it really, really freaked me out in a nightmare-inducing, my lunch tomorrow is ruined sort of way. Why did you make me watch that, you heartless bastard?(see what I did there, huh? huh?)

But I agree that "The Mountain" is epic. Her voice might save me from the sandwich terrors.

OHMIGOD! THE IRONING! :D That was good wordplay with the "heartless bastard" bit, though. Hats off to you.

And I love that vid. Making fun of hipsters just doesn't get old. Ever seen this? - http://www.hipstertravelguide.com/wp-content/uploads/2009/07/hipster-bingo.jpg

ahaha.."that 70's ski-jacket" love it. Every time I think it might get old, it doesn't.