Watch for the Loose Rocks Under Your Feet

This week's album review is on a fully Canadian band. I mean, comes from Canada, sings about Canada, tours in Canada, no American media can be found for them in the least.

And in a reversal of trends, I am picking up on Said The Whale almost a year after second full-length album was released. (Get it, cuz Canada is always behind us? Ha ha. Yes I know, Canadian Hockey Team. Gold. 2010. Whatever. They invented the sport.) 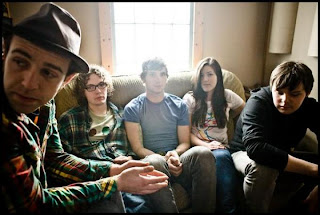 
Islands Disappear was released last October, after an EP in July and another full-length the summer previous. The band formed officially in 2007 after a few years of basement recordings by high school pals. And they haven't always sung about Canada. Their 2008 album Taking Albalonia and subsequent re-release Howe Sounds/Taking Abalonia are both much more upbeat, while at the same time, so very indie.

This makes me appreciate Islands Disappear all the more. Knowing what the band is capable of makes it enjoyable to listen to a dedication of sorts to the vast, expansive Canadian homeland and all the pioneers who have shaped its history.

...Recent history is not ignored on this album. Lest you think the very popular (well, in Canada...) track "Camilo (The Magician)" is just a fun song about an imaginary character, oh no dear. Mago Camilo is a young Colombian man whose life has been made of magic, and who has chosen the True North as his second home.

They released a new EP earlier this year, and they're submitting new songs to Canadian radio all of the time. What say you, America? Are you going to catch up to the Syrup Lickers?