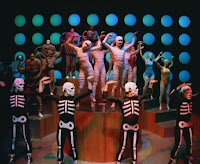 Michel Gondry makes me happy. When I found out he was the director of Eternal Sunshine of the Spotless Mind, I almost immediately went to see it in the theater. Same goes for The Science of Sleep. The latter is almost becoming prophetic in the sense that we're watching the combination of the real world with the imagined through the internet and gaming. Soon, who's to say we'll be able to tell the difference? Is it a good thing that realism is brought to such a high level? At what cost? That's a separate discussion, however. One that I could have at length over a beer or two.

Anyhow, this week's post is more about some of the songs and videos that Mr. Gondry has done over the years. I thought about Gondry because he loves the use of stop-motion, which sounds easy, but definitely isn't. Not all of these use that method, but the creativity he possesses can't be denied. First off, we go with the easy one. Daft Punk's "Around the World". The entire album Homework is brilliant. Hard to say about an electronica album. This video, like the one later by the Chemical Brothers, uses the elements seen as representation of the different elements used in the song.

Next is one most of us probably forgot about. Lucas. Anyone? No? Okay, well just take a listen to this song and/or watch the video and you'll remember it pretty quickly. And yes, Gondry did direct this!

How about that? Most folks probably forgot about that guy. Well, next is the one that relates to the Daft Punk video. The Chemical Brothers' video for "Star Guitar" at first doesn't really dazzle anyone. Pay attention to the scenery through the train window, however, and how it enters the video. The first time I realized what Gondry did, I was simply amazed and re-watched this video another half-dozen times. It's simply brilliant. I'm watching it again right now, and just giddy. Seriously.

Last up is the stop-motion I spoke of. He used a lot of this in The Science of Sleep, and used it with some of his videos. For The White Stripes' "The Hardest Button to Button", we see it done, and one can only imagine how much work went into filming and editing this. It's crazy the ambition this man has to create what is essentially art through motion. It's now time for us to appreciate it.


Download The White Stripes - The Hardest Button to Button

Now, quit reading this and buy something.

Email ThisBlogThis!Share to TwitterShare to FacebookShare to Pinterest
Labels: around the world, chemical brothers, daft punk, homework, lucas, lucas with the lid off, michel gondry, music video, the white stripes