That's All You'll Ever Get From Me

This band is getting a lot of press as "The next big thing from Vegas." I don't mean to be a balloon-popper, but you've got a lead singer who is a Vegas native, his cronies from BYU, and their cronies from the east coast who all moved to Vegas a year ago. So I don't know if I am supposed to point out their similarities with The Killers or why they are dissimilar or whether just having mixed musical elements makes you sound like The Killers... But it's effing hot outside and inside, I'm afraid to kick my thermostat over 80 lest my power bill surpass the $423 it was for the last month, I want to work out but where would I do it, and it's making me kind of oh... Wait.

Now that you've had your serving of piss with corn flakes, let me say that Imagine Dragons truly have an amazing stage presence, put on a great show, and have an impressive sound. 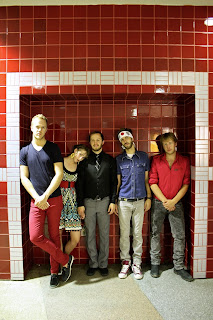 Imagine Dragons is Dan Reynolds on vocals and keys, Wayne Sermon on guitar, Brittany Tolman on keys, Ben McKee on bass, and Andrew Tolman on drums (yes, married. Recently.) They recorded their first EP upon moving to Las Vegas from Utah. It was good. Then they released a second, and it's ten times better. So... Maybe the heat didn't get to them yet. Maybe they knew they needed to be in Reynolds' hometown to really get the energy flowing. Maybe the fact that his brother is also the Killers' manager doesn't hurt with the momentum either.

It's working. They have knocked out competition in multiple Battles of the Bands, traveling extensively to provide the beat-down with their energetic on-stage presence. I saw them open for Paper Tongues, Civil Twilight, and Neon Trees. They were unequivocally better than the other two openers.

Not everyone agrees. Molly Bergen from West Coast Sound said, "It was exactly the kind of neutered, harmless pop rock that made Maroon 5 and Train stars. With their lead singer's good looks and passionate thrashing on stage they should go far." OUCH! Well, what are you going to do. They're the rockin'est Mormons since the Osmonds. You gotta start somewhere. They've got endorsements from Vegas' local "mix" station as well as from their "alternative" station, so maybe Bergen isn't too far off.

After an amazing week in Los Angeles and performance in Las Vegas, the band is headed back to Provo for a week, seemingly to relax since the next gig is on Friday at Club Velour. Then it's on to Park City for a festie, back to Vegas in September for a show at the Pub at Monte Carlo - that sounds like a good time! - and then back to return to the scene of their recent domination at the Viper Room.

You need to get on this.

I was lucky enough to be in Vegas at the end of July, so I got to see Imagine Dragons at the Hard Rock Cafe. They were absolutely terrific. My friends and I only went to see them and it was well worth it.