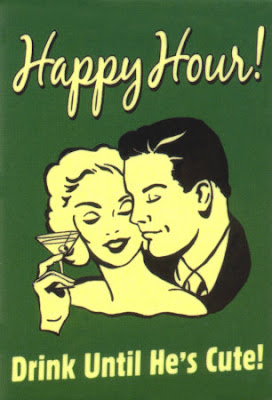 The Little One and I have begun frequenting a particular bar once a week to enjoy happy hour drinks and food specials. We have become fast friends with the bartender there, he pours heavy and provides some great conversations.

One of the down sides of this particular bar is that there is no jukebox. Like most bars, they are moving away from the jukebox to Satellite Radio. Mostly because allowing your drunk customers to have control over what the bar is forced to listen to is problematic. Imagine the drunk guy or girl who just broke up with their significant other? The entire bar will want to slit their collective wrists from having to listen to $5 worth of sad breakup songs. I have been known to throw $5 in and play all my favorite post-hardcore bands. Usually after only the second song the "regulars" tend to grumble. After 4 songs they usually turn the volume down!

Even with satellite radio, patrons will grumble. When the bartender overheard me complaining about Chris Cornell though, it nearly started a war!

If you have been reading my posts on this blog, you know I can't stand ANY incarnation of a band that includes Chris Cornell. I've tried. I was even hopeful about that abortion of an album, "Scream", Chris did with Timbaland. The single was good...but the rest of the album was just a disjointed mess. I try to avoid sharing my opinions on Cornell in public. The fans of Soundgarden or Audioslave are many, and I am but one. Unfortunately, the alcohol had loosened my lips, and I blurted out to the bartender "Chris Cornell is a talentless twat!"

The bartender erupts in disbelief. "Soundgarden! Audioslave!" he exclaims. "All garbage," I respond. He walks around the bar to tell his patrons of what has just been uttered from the other corner of the bar.

I watch as he walks around the bar. I watch the people squint their faces to listen to what the bar-keep is ranting on about. Then I see their faces change. Surprise at first. Then to contempt as they scan the bar to see who uttered such blasphemy.Then they lock eyes with me. Then I see hate.

I held my head high, affirmed in my belief.

Then the crowd seems to surround me. They begin to test me..to figure out who they are dealing with. They ask me about Mother Love Bone. Temple Of the Dog. Singles. Seattle.
"Do you like Pearl Jam?" they ask.
"Yes!" I reply.
"Do you like Pantera?" they ask.
"Meh," I respond.
"Alice In Chains?" they ask, with their breath held.
"No," I mutter. Drunk or not, I should have never allowed them to lead me into this trap.

They all turn on me, with blood in their eyes. I think secretly they all know Cornell is a hack...but their beloved Layne Staley? The juggernaut that is Alice In Chains? This will NOT pass! They begin to joke and laugh me off. They taunt me and throw insults. Until, that is, the drunk burn out Granger speaks up.

Granger is considered by the regulars of the bar as THE music guru. He is usually heavily sedated by grain alcohol, and tonight is no exception. Granger clears his throat. "I agree," he says to me. Granger continues, "There are better bands. Tool for example." I'm not even sure exactly what he means, but the bar is hushed.

"Tool is amazing. League of their own," I spit out.

The bar retreats, grumbling and disappointed, back to their stools. Unsure where to go from here. Their wise Granger has spoken, and HE approves of the visitor from another land.

I have only one friend left in the building, and if I don't befriend him and strengthen this new found friendship, then I'll probably get shanked on the way out to my car.

Granger and I parry. Nothing too aggressive. We throw out names of bands and artists. The other agrees when a good choice is named, and sends back a few more names the other way. We finally get to the final draw. "Thrice. Amazing Post-Hardcore band. Do you know them?" I ask the wise but wobbly Granger.
"Thrice? No. I'll check into them. Have you heard of The Black Angels? Neo-psychedelia. Post-Punk," he says. He knows now that we are finished. You see it in his face. It's a draw. We'll continue another day perhaps. But not today. He is my nemesis...and I am his.

He retreats into the night and I pay my bill and do the same. Immediately when I get home I research The Black Angels. I buy the albums, create a playlist, and meet my pillow in an embrace.

The next day I put The Black Angels on the iPhone and head out into to my day. The first album I really get into is the self-titled one released in 2005. It's getting me really exicted! It's like Jim Morrison meet the Beatles in a dark LCD fueled dream. The band has toured with Wolfmother, The Black Keys, and Black Rebel Motorcycle Club to name a few. Those three bands in particular though, do share acoustic similarities with The Black Angels. Dark, Bluesy, effect heavy guitars. Let's listen to track one off this album. A cut called Black Grease.

There is two other albums by the Black Angels you can and should pick up right now. "Directions To See A Ghost" and the indie-acclaimed, internationally praised "Passover".

I checked out The Black Angels official site and discover they have a new album coming out September 14th on Blue Horizon Records. I suggest the pre-order. I've already paid for mine. Has Granger? I doubt it.

I bet he hasn't even heard the new song Bad Vibrations. Guess who did? That's right...Us.

I haven't yet listened to the band, but I gotta say this is one of your best pieces of writing. Well played, my friend.