A bowler hat he wore, his eyes became obscured, his teeth were telescopes,
you should have seen his legs were the rolling rivers, they call him the forgiver although he cannot forgive


With the proliferation of the hardware and software to allow any musician to record and master an album, we have entered exciting and refreshing times in music. There are many people making music now, without the help of a label and it's marketing machine. Enter the music blog. Once your blog is established... bands, labels, and even your friends will send music for submission. My inbox gets stuffed with links to bandcamp and soundcloud. NOT complaining, but it's tough to get through it all. As a necessity, I must only allocate a brief read and listen and move on if I wish to clear the unread messages in one sitting. Sometimes though, something catches my eye or ear, and I settle in for a more in-depth discovery.

In this case, it was a rather innocuous thing that grabbed my attention. The title of a song. "ROSYLN IS A CYLON". Being a fan of the BattlesStar Galactica franchise, including the 2003 re-imagining, gave me cause to pause and pay attention. If you avoided watching BSG because you thought it was, well...to geeky for your tastes, I don't think I can get you up to speed with out making this post too long winded. In a nutshell, Roslin was the president of the 12 Colonies and Cylons are a race of sentient machines, created by humans. These machines had learned how to look human, so figuring out who was a human and who was a "skin-job" made for some interesting episodes throughout the series.

I quickly load up track two off Petrushka , the yet to be released LP from the band Honeytrap, and take a listen.

The sound of the song, and much of the album, is unconventional in many ways, yet strangely familiar. An Eastern European sound combined with Folk and Rock, much like Gogol Bordello, but with a Pop sensibility that will likely allow them that crossover factor that is so important today.

David Bowie is a fan, and sums up the band well in this quote taken from the The Times:


Balkan-inspired slice of craziness... Puts me in mind of some of Camper Van Beethoven's finer moments.

Oh yeah! Camper Van Beethoven! The side project of lead singer, and co-founder of the band Cracker! Damn that Bowie is good. It's a good thing HE doesn't have a music blog!

Curious about the origins of the song and expecting a BSG fan's fantastical analysis of some episode where a clue was found pointing to the possibility of Roslin secretly being a Cylon (she isn't) and using her presidency as a way to undermine the fleet (she didn't), lead me to shoot an email off to the band.

"Big Dan" (guitar/vox) was the author of this particular song, and quickly replied back with an explanation. Sadly, no BSG fan was found, but the story was interesting none the less. 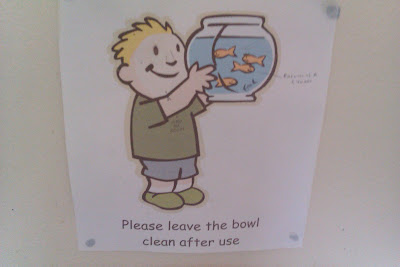 The song is basically about being under control. I guess it represents the lack of trust the the government had for us. There is the shadowy figure always watchful throughout the track, representing the feeling of a nanny state I was having at the time. The Roslin line comes from a sign in the toilet where I work. Its printed "please be careful, leave the bowl as found". I got squeamish at the thought of the management unable to trust its educated staff to properly use such facilities and it went into the song. There's a little cartoon fish in the picture and someone has scrawled "Roslin is a Cylon" as a speech bubble.

I guess there was no point in asking if he was disappointed in the ending of the BattleStar series. (frown)

Sometimes it's a song title, or an album cover...but to an up-and-coming band to get noticed, takes a bit of luck sometimes. Luckily for me, I noticed a song title and discovered a great band in the process.

You can pre-order the album Petrushka on Honeytrap's BandCamp site. I suggest you do...unless you are some sort of Skin Job?

Nice! Thanks for the new tunes, I'm excited to check them out. Although I will admit, the title did make me hope it was some sort of ode to Roslin.

An ode to Roslin is a good idea. Maybe I should write a song?

I hope you do!! Reluctant leader to tragic prophet? She's an epic poem:)