Considering the state of affairs 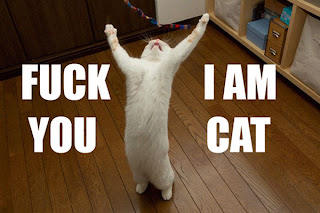 Well, people. My external hard drive? It looks like it shit the bed. Not good. I had a lot of my music there. A very sad state of affairs, indeed. So it makes the song I'm posting even more poignant. I think everyone and their mother has heard the Cee Lo track "Fuck You". It's how I feel towards this fucking piece of shit hard drive. Ah, well. My own damned fault, I guess.

Anyhow, Cee-Lo is already catching heat for the song. Just check this Washington Post article on it. You know what? Fuck you, FCC. And fuck you to anyone that finds it offensive. You're what's wrong with America. You're no less oppressive when it comes to language than the Islamic jihadists and their treatment of women.

If anyone that's uber-PC wants to give me shit about that comparison? Fuck you, too. You're also what's wrong with America. You meekly say that groups like the Klan have the right to speak publicly, and run at the slightest bit of confrontation, yet I can't say the word "paddywagon" without some dipshit Asian kid getting mad at me. True fucking story. So there you have it. There was a certain eventuality with this song that said this would happen. Groups would get pissy about language. Read that again. Pissed about language. Are you fucking stupid? A word makes you upset? A word??? Well, fuck you, too.

And by the way, I'm personally already fucking sick of this song.

And if you are so privileged in this world to not be the subject of a slur(Irish in the early 1900's, Female, Black, Asian, Hispanic, Gay, etc.) fuck you for thinking that you have any idea of the effects of just one word.

Fuck you for not knowing how damaging slurs are; not only because of their origin, but also because they reinforce the system of oppression and/or violence that produced the slur in the first place.

Fuck you for not knowing that your line of thinking is what's wrong with America.

Thanks for thee truth:more need it::

This song's really no different than the South Park guys using the word "shit" with a counter at the bottom of the TV. Instead, people make the words more powerful by telling people they're obscene. And that pisses me off. I'm half-Irish. I tore that little Asian bastard a new asshole. I know the etymology of the word. He didn't. Typical ignorance through trying to feel morally superior.

George Orwell was correct in showing we're working to dumb down the language. You see, THAT'S what I find obscene! :D