Bit ashamed to admit this, but....

I have slept on quite a bit of hip-hop over the last 12-15 years. Why? It turned to utter shit. That's why. Don't tell me otherwise. I mean, there's been a smattering of decent stuff over the years. I get that. J5, for example. Stellar shit. Then there's the music that the recently deceased Jay Dee - aka J Dilla - helped create for so many others. He happens to be one of the guys I'm talking about today in my post. Ever heard a lot of what he did? This next one, for some reason, just blew me away with its simplicity and really did describe the title of the album Ruff Draft.

The track "Nothing Like This" is just a phenomenal piece of work and was released also released by the Adult Swim people on Stones Throw Records on a compilation entitled Chrome Children. The video for this track is nothing short of incredible, also. Check it out. 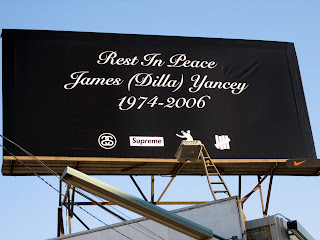 If you guys haven't somehow heard of Jay Dee, I suggest reading an article that The Detroit Free Press did on him just a few weeks after he passed away. You will get an idea of the kind of dedication to music he had. Click here to read that story. And now, here's that track "Nothing Like This".

The other artist is one that's gotten a ton of pub the last couple of years. It's Kid Cudi. Yeah, I will take some shit from the uber-indie crowd. Well, fuck you. I say that with a smile, so don't worry. I am the type that will give credit where it's due. If a band or artist I can't stand makes a good track, I'll openly say it. Not that I dislike Kid Cudi, but considering how mainstream he's gotten, I pretty much never paid much mind to him. My bad, I guess.

Well, the opening track to his album Man on the Moon - The End of Day is a hypnotic piece. It's called "Here In My Dreams" and I would have to say that this is a pretty solid piece of work, and a great way to start off an album. Mind you, I haven't really heard the rest of it. The only other track I had heard was "Day 'n' Nite", which I actually have here, but not the original. I've added along The Crookers Remix of that track. This is the sort of remix that the Canadian DJ Duo Jokers of the Scene would add into a set. And I wouldn't be surprised if they had.

Buy something. If you don't, god will kill a dumb person. Actually, that's a good thing. Well, just buy something. Because I said so. And yes, I didn't capitalize "god". Big deal.

Can I use that as my excuse for sleeping on hip-hop for the last decade and a half? Mookie is always so disappointed in me.