Spent Half My Life In A Customer Service Line

It seems like people are desperate to find the easy-listening type of artist they can turn on when they want to intentionally feel depressed. Or deeper in love, depending on the slant they want to pull out of the music. Apparently the world needs more Joshua Radins... Ray LaMontagnes... Damien Rices.
Myself, I have honestly never listened to Radin but I worship LaMontagne and can barely stand to listen to Rice.
Oh wait.
Don't get me wrong. I love Damien Rice. I listened to O a minimum of one hundred seventy-eight times. But it slices through my heart like a razor. It's hard to hear. So here is my replacement: 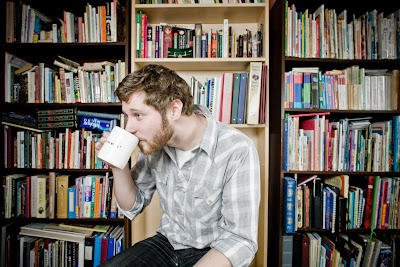 Even that pic just kills me - but in a good way. Thankfully. Who is this Dan Mangan? A Canadian chap, been recording music since he was 20. That was in 2003 when he released his first EP, All At Once. Mostly his work has been recognized throughout Vancouver. The album I recently picked up was released in August 2009, called Nice, Nice, Very Nice.

Let me share with you what everyone in Vancouver gets to hear on the radio, on the daily. Track 1 and 2 are what's been released, and I like them fine, but I'm loving the other tracks more. The releases getting radioplay (well, Canadian radio) are both a bit more on the anthem-y side, but I prefer "Robots" (Track 2) to "Road Regrets" (Track 1). I just feel like both these tracks switch direction on you and you ask yourself, wait - what was this song about?

You're wondering where in the hell the comparison to any of the artists above is. Yeah yeah. I've seen comparisons to Radiohead (is that just a catch-all for bands who you can't assign another "sounds-like" to?), and Bon Iver. Well, in Track 3, "The Indie Queens Are Waiting", Mangan utilizes the support of Veda Hille for a back-and-forth that reminds me of Damien Rice and Lisa Hannigan, and never picks up the tempo. And it's a gorgeous song, even if it has nothing to do with the heartache that the other couple sings about.

So the album in its entirety is really a mix of all things that Mangan wants to create.

“For this record, I think I kind of turned the corner from listening to strictly roots music to listening to a lot of indie rock and indie pop,” he says. “It then became about branching worlds together. There are a lot of one-two bluegrass bass lines on the record, but at the same time I don’t feel like it’s a bluegrass record. There are a couple of songs that are really mellow and guitar-vocal-heavy, but I don’t feel it’s a sappy singer-songwriter record. There are a couple of punk-rock fills, but it’s not a rock ’n’ roll record. I really don’t know where it fits in.”

So he starts his wrap-up of the album with a simple, but somewhat jarring portrait of one man's life, and the final track is then quite something of an open-ended question as well. But here is Track 11 of 12, "Basket."