Scatter These Ashes All Around 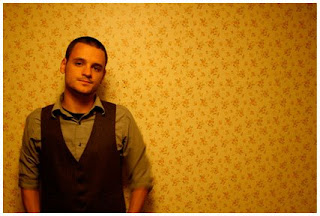 "We Are Bound To Save Some Souls Tonight is a record full of dirges, shanties and shithouse anthems, transmitted from a land where your dancing is proportional to your depression. Eric Rykal is someone to keep an eye on"

My post about Mumford and Sons got me an opportunity to review the new album from Eric Rykal's band, The Gentle Guest. The band's PR firm describes The Gentle Guest as the "hyperactive brother of Mumford and Sons"! The band released the new album, Cast Off Your Human Form on July 20th. I love how this album is absolutely a dark and bluesy explosion of Americana, only now it's drunk after drinking from a big ole cup of trouble and sins.

These boys from Eau Claire, Wisconsin have really created something special with this sophomore effort. Not that their freshman release is anything to scoff at. We Are Bound to Save Some Souls Tonight was a fast burning fuse of an album, a combustion so fast and strong it will ignite the synaptic pleasure center of your brain. Let us listen as the match makes contact: 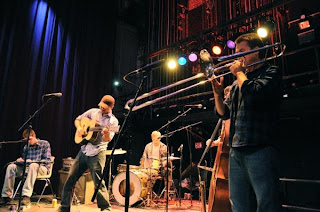 The new album was recorded by Rykal not only in the local hometown studio that he owns and runs, but also in several surrounding locations including a basement here and a living room there. The musicians involved on the album are a rotating list of Eric's friends from the Chippewa Valley. How do you take that kind of sound out on the road?

Playing the new songs live has been a bit of a chore for the band, if not for trying to recreate the feeling of the album, than just for the simple task of fitting all the members and instruments on stage. “We’ve had upwards of 8 or 9 people,” says Rykal. “We wanted it to be some sort of rowdy, theatrical spectacle. We figured having a ton of people on stage was the easiest way to accomplish that.”

Sounds like an epic show...I can't wait to see them live! There is one song on the new album that is very stripped down, and actually is one of my favorite tracks.

Sometimes a chorus of voices and a hand-clap is all you really need...


Download The Gentle Guest - Who Is Gonna Love You

Before you head off to buy the albums of The Gentle Guest, quickly check out the tracks they did for Daytrotter!