The least you could do is try to act surprised

Here it is again. Festival Season in full swing. If you've been to, or even considered, a music festival in the last few years you may have heard of Tokyo Police Club. It's almost as if they formed for the sole purpose of performing at festivals. Within two years of becoming a band, they played Coachella, Lolla, Bumber, Glastonbury, and Reading & Leeds. All in the same year.
In 2010 they will be doing some European festivals, Squamish, and... Outside Lands.

As you probably know, inALLcaps had some representation at Outside Lands last year and I've been turned a bit inside out with the decision not to attend this year. And up until now this was a secret: Tokyo Police Club was my main reason for trying to hold out so long and convince Mookie to go. 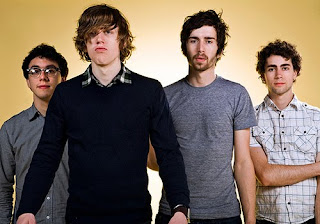 There is something soothing in the lead singer's voice and something jiggedy in the music that makes it feel like something you should always be listening to.

Infectious. That's what it is.

And I can't decide which is my favorite track on Champ, released Jun 8. But Track 2, "Favourite Colour," is pretty damn enjoyable.


Honestly I like each track more than the last. And I am starting to get really torn between going to Outside Lands just to see these boys, going to Hawaii, buying a car, paying tuition... Hmmmmmmmm...

Check out their first released video from the new album, for the track "Boots of Danger (Wait Up)". Friggin adorable dogs swimming. No really, trust me. I never knew dogs who put their front paws in the water before going in. I thought they all just got a running start. I don't know about the one who appears to be getting himself out at the wall though. Did I pay too much attention to detail on this video?


You're going to buy this album now right? I don't know how you can survive the rest of the year without it.