in those bad shoes 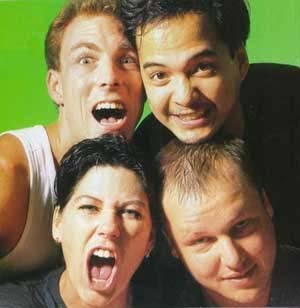 I'll be seeing The Pixies play here in Vegas in September. I'm totally stoked to see the show.I even bought a book from the 33 1/3 series on Doolittle to tide me over...but more on that later.

I have been taking piano lessons from a friend of mine. We'll call her Vanessa. Vanessa texted me a few weeks back asking if the girlfriend and I would like to see The Pixies in concert. The Pixies are a band that I love that I have not gotten to see in concert. In fact they were already broken up by the time I became a fan.

Jump to 11 years after the breakup to the year 2003, and the front-man Black Francis agrees to go on a reunion tour with his former band mates.

Now it's 2010 and with rumors of a new album in the works, the band is back on tour, and I'm gonna see them when they stop in my city. This is being called the Doolittle Tour to commemorate the 20th anniversary of this stellar album. They promise to play every song on the album, along with some b-sides and surprises!

The Pixies, although not a full on success in the States, have been given the trophy of "influential" and is likely the starting point for many alternative bands who did achieve success. Bands like Nirvana to Bush probably can credit The Pixies to any success they have seen. Cobain has even said that "Smells Like Teen Spirit was an effort to make a Pixies song. Although many would have trouble making the connection, The Pixies perhaps invented the Quiet/Loud/Quiet formula. Here's a Cobain quote from a Rolling Stone interview:

"I was trying to write the ultimate pop song. I was basically trying to rip off the Pixies. I have to admit it (smiles). When I heard the Pixies for the first time, I connected with that band so heavily I should have been in that band - or at least in a Pixies cover band. We used their sense of dynamics, being soft and quiet and then loud and hard." 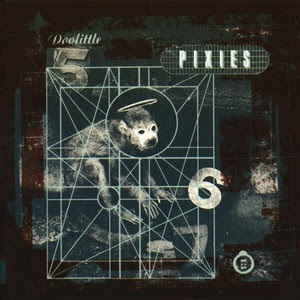 Excited about seeing the band, I grabbed the book Doolittle from the 33 1/3 series of books. Here is what the publisher describes the book:

DOOLITTLE. By Ben Sisario. (Continuum, paper, $9.95.) A friend of mine once had a girlfriend who kept a careful diary. "Never has so much been written about so little," he'd say. You could say that about "Doolittle," too, an entire book devoted to a Pixies album (part of Continuum's "33·" series). But that would mean you don't know the alt-rock god Charles Thompson, a k a Frank Black. Sisario, who is on the arts desk staff of The New York Times, explains how Thompson and a buddy once placed an ad in The Boston Phoenix: "Seeking female bassist into Hüsker Dü and Peter, Paul & Mary." Only one person responded: Kim Deal (later of the Breeders). In April 1989, "Doolittle" was released, and history was made. "They had a good angle . . . band with pretty girl and silly name makes weird music that critics dig," Sisario writes. Thompson was "an Everydude, a pudgy blank slate" whose lyrics about "sexual loathing and visions of apocalypse" touched a chord. "I don't know that sex is a totally beautiful, normal thing the way that the gods intended for a lot of people," says Thompson, who (to his credit) refuses to get too deep about his music.

The book is great, and I can't wait to share the book with Vanessa at my next lesson! My favorite part of the book is the breakdown of each song on the album. Here is the excerpt about the song Tame:

Pure minimalism is a straight line dividing space in half. Night and Day. Loud and soft. Whisper and scream. And there is no better example of the Pies' particular kind of minimalism than "Tame," a switch abruptly goes from hot to cold to hot again.

The composition is so simple that it's almost insignificant. Three chords reduced to three throbbing bass notes--D,C,F--persistant without change or interruption. It's song writing done on a dare: see how much we can do with so little, with the same chromosomes that are in every single pop song.

Email ThisBlogThis!Share to TwitterShare to FacebookShare to Pinterest
Labels: 33 1/3, doolittle, Tame, The Pixies

I can't wait to read it either! I'm going to explore this 33 1/3 series you mentioned as well. I know nothing of it.

P.S. Upon my first read on the link on Facebook, I thought you actually heard the three notes D, C, F, and I thought, "My God! He has perfect pitch, and he didn't even know it!" :) Cheers!

I wish I had perfect pitch! It would make things easier!