Do You Know How Scared I Am About The Bottom Dropping Out?

"How did THAT happen?"

That's what I said to The Little One when it dawned on me that we had never written a post on Kevin Devine.

I was listening to the entire Kevin Devine disocgraphy in preparation for an upcoming concert when that thought occurred to me. Everything from Circle Gets the Square (2002), various Daytrotter recordings, to the new EP released this year, She Stayed As Steam, was on constant rotation for the last week or so.

We have been fans of Kevin since before the Brand New/Manchester Orchestra tour of 2007. Being fans of Brand New we quickly began digging in to these two openers of their show. After listening to albums from both Manchester and Kevin Devine, we decided that we needed to catch these two acts. Sadly, I was late getting to the venue and only caught the final song of
Kevin Devine's set. What a finale it was! Members of all the bands on the tour came on stage to cover Nuetral Milk Hotel's "Holland 1945" alongside Kevin.

I've followed Kevin's career closely after that show. I watched youtube videos of his performances. I read interviews and articles about Kevin. I enjoyed his albums immensely and shared them with friends. But it was always with some regret over missing Mr. Devine's set with the Goddamn Band.

Kevin is a pretty amazing and eloquent songwriter; creating characters and backgrounds for weaving tales in some songs (I've never been a joiner, no, I've quit every team I've been on), allowing for honest examination of personal relationships in others (when you realize it's a pattern and not a phase), and rallying against war and human rights violations in what I presume are his favorites (It's the mission of modernity, go get what's ours til there's nothing leftover to get no more). Pair that with a strong and distinctive voice, and well...well you can only come up with Kevin Devine. 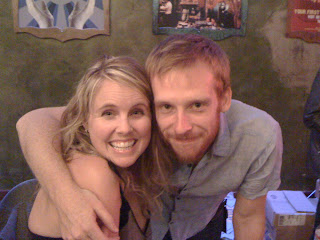 We got to the House Of Blues early, knowing we had to catch ALL the openers. "Is that Kevin manning his merch table?" says The Little One. I look over...well it looks like Kevin. It's not ridiculous to see members of the band a the merch table, but for some reason I just didn't think this was Kevin. "Nah...he probably hires people that look just like him. Makes him more comfortable. I would do the same." I say, smiling. What else is new - she didn't listen to me, and went over to chat him up. Together we reminisced about that last Vegas show, now over three years' past, other acts we've caught since then, and the projects he's most excited about now.

One of the projects is called Bad Books and his a collaboration between Kevin and members of Manchester Orchestra! Kevin thinks it should have a release date sometime in October this year! You can catch an acoustic version of one of these songs on the PodWreck podcast featuring Devine. The track is called "You're a Mirror I Cannot Avoid" and the lyrics and melody are captivating. Check out the song and interview here.

Kevin's set was notched up in intensity from what you might find on his albums. Opening for post-hardcore band Thrice is likely the main reason for this, although I found it refreshing. Imagine your favorite tracks turned up to eleven, a new found fire lit fresh under an already boiling pot.

Things really get hot when Kevin Devine and his God Damn Band take off their shirts...during "Time To Burn (Another Bag of Bones)". Yes. That is correct. The boys removed their shirts. And then various members of the other bands came out shirtless, wearing makeshift masks, pantsless, or a combination thereof. As Kevin counted off a litany of inequities in the world, other men gyrated around him. How's that for not taking yourself too seriously?


Download Kevin Devine - Time To Burn (Another Bag of Bones)

It was a great show and it was great to spend some time chatting with Kevin. Maybe we can convince him to do a proper interview with us in the future? Mr. Devine hinted at a possible Hull/Devine tour (he said that it might be around 15 dates) to support Bad Books. If one of the dates isn't in Vegas we're hoping it's somewhere close...

One last thing...Kevin didn't know about the recording from Jackson, MS of a little acoustic tour he did with Jesse Lacey. It's one of our favorite finds. Check out Kevin playing Cotton Crush with Lacey: