It's interesting how I discover music. It's like a rabbit hole. One song leads me to another album then to other bands, and suddenly I am discovering a new band altogether. New to me at least.

I was checking the blog email box and saw that Philip Selway just leaked a track off an upcoming solo album.

You know Mr, Selway, the drummer for a an itty bitty UK band called Radiohead.

I start to do some other searches for Radiohead and Selway. I start to head down the road of the band 7 Worlds Collide, a band Selway contributed to. Instead, I come across something I thought was much better. 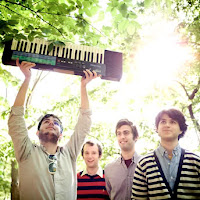 I discover that there is a new Stereogum project out called OKX: A Tribute to OK Computer that celebrates the 10th anniversary of Radiohead OK Computer. The idea was to get a bunch of musicians to cover every song of the album. One of the standouts was a cover of Exit Music (For a Film) by Vampire Weekend.

Here is what Ezra Koenig had to say about the original and the cover the band did:

"Exit Music (For A Film)" was the first Radiohead song I really got into. My friend Olympia put it on a mixtape for me. At the time I was struck by how much it sounded like classical music. Now I hear trip-hop and maybe a little Pavement (?!?!). No matter what I hear in it, this song is still 100% high-style Radiohead, a super-ambitious, pre-millennial banger.

Then I realize...Pavement? I thought Pavement was a heavy metal band...wait...have I ever listened to Pavement? huh.

I delve into the bands history and discography. An indie band that stayed indie for every release. 5 full length albums and 9 EPs in 10 years. Not metal... alternative rock. Apparently they only experienced moderate commercial success but had a strong cult following.

The group broke up in 1999 but has a reunion show scheduled in New York's Central Park on September 21, 2010. The tickets sold out in two minutes.

I checked out the albums "Slanted and Enchanted" (1992 and their first full length release) and "Terror Twilight" (1999 and their final full length album) and I like what I heard, but it felt dated. I mean they are old albums, but sometimes an album can still fell cutting edge and fresh years later. These two releases were not that. I can see how they must have influenced many bands that I love. Modest Mouse, Silver Jews, Built To Spill, Wavves all feel like they might have been influenced by Pavement.

That's how I discovered the band Pavement.

Dated? Pavement? I think Pavement are one of the few 90s alt. rock bands whose music hasn't dated! The production on Terror Twilight might be a little bit slick, I guess, but maybe checkout "Brighten the Corners". That DEFINITELY doesn't sound dated.

I'll check out that album for sure! Thanks for reading and the comment!