your boldness stands alone among the wreck 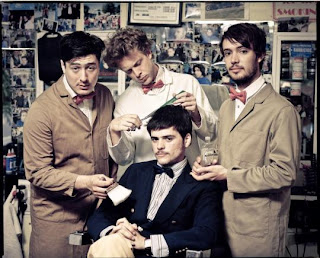 weep for yourself, my man,
you'll never be what is in your heart
weep little lion man,
you're not as brave as you were at the start

One of my good friends shared an album with me on Friday that really caught me off guard. It's rare that someone shares music with me that I haven't heard about. It's rarer still to have someone suggest a band to check out that is as successful as this band has been.

Mumford and Sons has sold out just about every show on their U.S. tour. They are playing just about every major festival in the states. In the U.K. their debut album, Sigh No More has gone Platinum.

rate yourself and rake yourself,
take all the courage you have left
wasted on fixing all the problems that you made in your own head

Check out the video for one of the best songs off the album in my opinion:

but it was not your fault but mine
and it was your heart on the line
i really fucked it up this time
didn't I, my dear?

It's one of those songs that, after the first time you hear it you just put it on repeat! I love the F-Word and I love the banjo!

I was immediately curious what the lyrics of the song were trying to convey. I had some ideas, but I looked it up anyways. Check out what Marcus Mumford himself has to say about Little Lion Man: 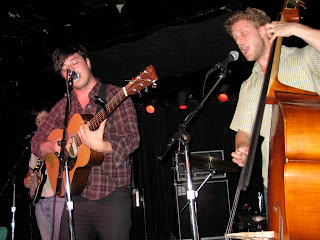 "It’s a very personal story, so I won’t elaborate upon it too much. Suffice to say, it was a situation in my life I wasn’t very happy with or proud of… and sometimes when you can’t describe a feeling with your own words, it’s almost easier to express in a song. And then, when you get asked about the songs, it’s quite difficult to explain. It’s a conundrum — you don’t want to seem self-indulgent explaining yourself; it’s always awkward. Which is weird again, because it’s never awkward actually singing them. I suppose the song should stand on its own and people draw their own interpretation from the words."

Mumford and Sons reminds me a lot of The Snake, The Cross, The Crown (or TSTCTC for short), another band I love. Since it appears that TSTCTC are breaking up, I guess I am doubly thankful for having someone recommend Mumford and Sons, as I have a hole to fill.

Cause you told me that I would find a hole,
Within the fragile substance of my soul
And I have filled this void with things unreal,
And all the while my character it steals

Email ThisBlogThis!Share to TwitterShare to FacebookShare to Pinterest
Labels: i love banjo, i love the F-Word, Mumford and Sons, remix

Here's a link to audio replay of their performance at Bonnaroo 2010(via NPR).