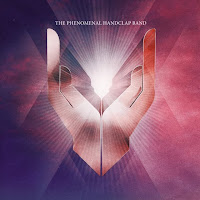 Okay, so I am that guy that hears certain sounds in songs, and my mind clicks and starts thinking of other songs with the same sound. Or what song they ripped off for a sample. Or ripped riffs off from. I mean, I had that sort of moment with that Edward Sharpe and the Magnetic Zeros track "40 Day Dream" and how close it smacked of Elton John's "I Guess That's Why They Call It The Blues". Seriously. Listen to those two songs one after the other and try telling me they don't sound similar. Read that post here.

Anyhow, this is another of those moments. It's a post I've been meaning to write for some time now, actually. I am sure that many of you are aware now of The Phenomenal Handclap Band. The name is just purposely weird, like so many other band names. It may be why I initially passed on them. "Oh. A weird name. Like I've seen hundreds of times before in the last three months. How cute!" Well, I finally did get around to listening to some of their stuff. The song in question today is their breakthrough track "15 to 20". Now, when I first heard this, I had that moment. The one where I said, "Why do I feel like I know this from somewhere?" It wasn't my knowing it because I had listened to it before. I knew that much.

Well, after a little time, I had it pegged. Anyone that has listened to Soul Coughing - a now defunct band that was great live, by the way - would probably catch onto this one. Their first album, Ruby Vroom, is one that really never gets a lot of recognition. Some may say it did, but do you really hear people talking that much about it now and how it influenced other bands? Not really. Well, they have a track on this one entitled "Casiotone Nation", and while I seriously doubt that The Phenomenal Handclap Band ripped them off, it does sound similar in just the verse of numbers being spouted about. Again, I'm not saying it's a rip-off. Stating a slew of numbers is something anyone could do. It was just that nerd-out moment that I tend to have from time to time with music. So do your duty and take a listen.