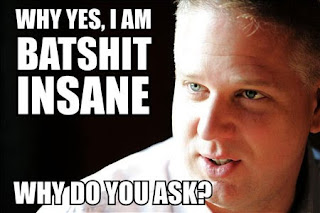 So after a long few weeks I've finally come to the conclusion that most people just don't get it. We live in a country right now that holds idiots like Glenn Beck up as a hero. A man that got booted off of more than a few radio stations for making incendiary remarks lacking any intellect is hardly a hero. And save me the tea party crap. A party formed out of misguided anger will eventually eat itself and its metaphorical young, to boot.

Well, I'd rather bring you all someone that actually is a hero. Well, at least to me. I get sort of tired of the aforementioned Beck and his ilk claiming there's some left-wing bias in the media when anyone with the smarts of a toaster oven can readily tell you that eight out of ten - if not more - radio programs are right-wing run. Same goes for print media. The reasons why are a completely different reason.

Well, these people tend to act as though they're getting bullied. That they're the minority. Bullshit. The minority are actually the ones that have a conscience. That despise war. That have reason. All you have to do is look at major polls done by people like those at Rasmussen to understand what sort of a country we live in. When a full two-thirds of our country supports the immigration law passed in Arizona, then people like myself are the minority. And I like to be loud and push back.

The guy that I claim as a hero here is none other than John Lennon. His song "Imagine" is pretty easily one of the top five songs all-time. Seriously. Try arguing with that. Anyhow, I've got the original up here today for your listening pleasure, as well as a couple of covers. One is by David Bowie, with the other done by A Perfect Circle. For anyone that doesn't know, Lennon did the background vocals on Bowie's "Fame". Nice tidbit of information. So here you go. Go nuts, people. And if you're a Glenn Beck fan? I'm laughing at you on the inside. And outside, actually. Why hide how I feel?

I think the"Rasmussen Poll" is a Conservative Biased poll..