The plot sucks but the killings are gorgeous 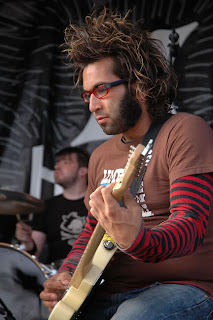 
I didn't know it was hot in the middle
I touched it once then I touched it a second time
'Cause I am that naive, a myriad of bright ideas

He is from Mahtomedi. I know that means nothing to 98% of you. But it just makes me feel like kin to him even more. Well, not kin, because maybe one day he'll marry me. It could happen. But innt he CUTE?!

This post isn't all about Justin Pierre. He is the main lyricist and rhythm guitarist for Motion City Soundtrack. To me it always feels like MCS is pretty mainstream and everyone knows about them, but more and more I am realizing - Why Doesn't Everyone Know About Them?

It just does something to me the way Justin is able to cram approximately 400 words into every song. And of course he's the guy who sticks out in the band pics, and he is there effortlessly delivering all of his fun, funky, and flabbergasting lyrics in the music videos, so he is the one who gets mentioned. 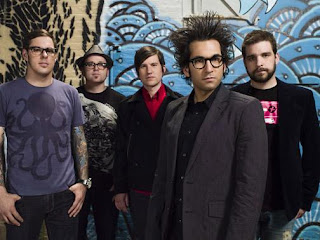 You had to have at least caught one of their videos on MTV. Being that the band creators fancy themselves as fledgling filmmakers, you know their videos are going to be good. Hell, the name of the band is no mistake, what did you think?


I used to rely on self-medication,
I guess I still do that from time to time.


So if somehow you've been oblivious to this band throughout the last decade, and you missed the video above from '05, I want you to check out their latest album and tell me you don't become an instant fan. It is absolutely the perfect mix of upbeat fuck-youness that we all love and appreciate. My Dinosaur Life is the name of the album, and it's been out since January. So get on it, pally. Check their touring schedule - there are still a few heartland dates before they get on Warped Tour. And you know Warped is coming somewhere near you.

I'm going to share Track 6, "History Lesson", because I think it best showcases the strength in Pierre's voice. You get just a hint of the underlying snark on the album and the musical talents of the rest of the band.

Stock up and create your summer soundtrack now.

OK, fine. Here's one more track for the kids. Now you need to go buy ALL the albums.