I thought about jumping... 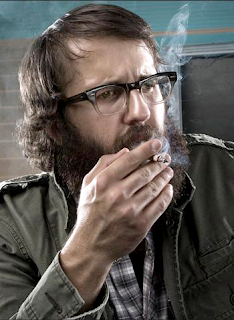 I was so sure that I had written about William Fitzsimmons on the inALLcaps Music Blog. I was beginning to panic that I never actually published it, or maybe I dreamt it.

Then I realized what I had wrote was in fact research for a podcast we mentioned him on.

William Fitzsimmons, if you haven't caught that particular episode of the podcast, was born the youngest child of two blind parents who were the occasional musicians. William was a psychotherapist before deciding to record some songs at home that would become his initial debut CD, Until We Are Ghosts.

Fast-forward past two more albums, 2006's Goodnight and 2008's The Sparrow and the Crow, both about divorce (the former about his parents, the later his own) and we have 2010's Derivatives.

It's fitting to find a great cover on this album, since it was his cover of Kanye's Heartless that I found meandering around the many networks of music blogs I frequent. This time it was a rendition of the Katy Perry hit "I Kissed A Girl," which he says he covered "to see what the tune would be like with that dark undertone as a more obvious context."

I love it. But, William Fitzsimmons is not all about covers, but he is down with a remix or two. In fact, Fitzsimmons has never had a problem with combining electronic music with with folk music. Derivatives, according to William's website, is a multicolored re-imagining of several prominent tracks from The Sparrow and the Crow, Fitzsimmons' well-received 2009 release. Derivatives contains several remixes of Fitzsimmons largely folk-inspired tunes - revisited and remixed in an electronic fashion - while still retaining the emotional and heartfelt core of William’s songs.

One such remix is the Mikroboy remix of "If You Would Come Back Home".


Download William Fitzsimmons -If You Would Come Back Home (Mikroboy Remix)

CMJ recently spoke with William about his new release, and he had this to say:

"I started to learn that people weren't experiencing these songs with the same measure of darkness. For some reason, they were hearing a certain amount of hope in them, and to be honest, that began to change the way I understood them myself. So I wanted a way to hear the songs in that more positivistic way."

They're not the happiest songs, but I DO hear some hope. Most importantly I hear an amazing album from an artist you need to know about. Buy the albums and share this post with your friends.