House of 9's Where I Belong

I bought this album last week and meant to review it on Friday. Then I sprained two fingers and shit got real. I'm just kidding. It didn't get real. I just like that phrase. But I did mangle my fingers pretty bad and typing just wasn't in the cards.

I heard of this band, Everest, because an old pal from childhood actually did the album art. Yeah dude! Give some props to the wildly attractive and popular Desi Moore. Thankya. 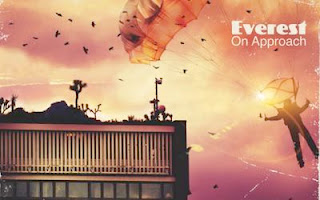 This isn't Everest's first album or rodeo, but really, let's pretend it is. They recorded Ghost Notes in 2007 when they had barely been a band for two weeks. They jumped on tour (with acts as notable as Neil Young, huzzah, and My Morning Jacket, of course) and got all set to record their second album. But a little something called SXSW happened, and before you know it, they sign with Warner Brothers instead. Mental note, prepare for an e-mail from the Web Sheriff du-du-doooo...

So May 11, On Approach was released and even though the band likes to say they don't actually sound like other bands, well. Look. We've all accepted it by now. We are a product of our influences; we just are. I realize I am probably the only one who hears Exile in Track One, "Let Go" -and yes I mean Exile as in 1978, long hair and synthesizers - but then I doubt many other people grew up with the fully stocked juke box that I did. I hear "I Wanna Kiss You All Over" every time I hear this track:


After that, I really don't mean to make any other comparisons and I just want to get in to this chill album. But by the time I get to Track 8, "House of 9's", I am hearing Thrice - or at least Dustin Kensrue - through and through. Another listen through the album proves that if you like Thrice, you will really love Everest. They're on a heavy-duty tour right now. I hope their van is holding up - go see them and buy some merch! Help them out! This is a solid, solid sound.

The band asks that you support your local record store, so why don't you go ahead and do so. Browse around for Exile while you're there too. Compare and appreciate the funky guitar sounds.

If you don't have a local record store, try buying online here.
Posted by The Little One at 1:17 AM