The Gasoline That I've Been Drinkin' Like It's Water 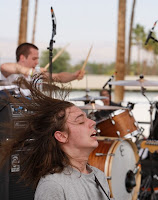 He's quite a talented young guy, this Robert McDowell. He has been the lead guitarist for the band Manchester Orchestra since 2005, and this year released his solo project called Gobotron. I remember when the kid started his own MySpace page with this same name in '08, and I wondered for a little while. But he didn't tell anyone about it until he finished the album.


So of course Jeremiah Edmond, whom up until recently was the amazing drummer for Manchester Orchestra but gave that up in order to stay in one place with his wife and run the label Favorite Gentlemen, happily pressed and marketed the music for him.
And when I say happily... I mean, he hand packaged these suckers and numbered them individually. And wrote a thank you note to go along with every order. 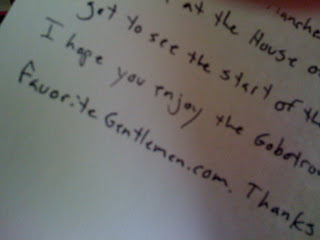 The project to him is the opportunity to "do exactly the opposite of" what he truly does enjoy - the working with a team. The sound, though, still comes off as if it was created by a group of happy pop rockers... Silversun Pickups. The Beach Boys. The Lemonheads. Something in there somewhere.

That's the magic of software: "This is a computer album that could have never been done if it were on tape. It became a science project rather than a band." The album name is On Your Mark, Get Set and I'm not sure how serious I need to be with you when I tell you - it's obviously just the beginning and you should really pay attention.

Now, despite the fact that Track One is :49 of Gobotron repeating the word "Nothing" and maybe shouldn't qualify as a track, somehow the "formula" has prevailed and it is Track Four which really gives what I think is the best representation. Enjoy "Never Turn Around":


It's good stuff, and this kid is going to make more and more amazing art so get in on it before your friends do. Order everything you need here. Get on that now!
Posted by The Little One at 9:48 PM

Email ThisBlogThis!Share to TwitterShare to FacebookShare to Pinterest
Labels: gobotron, manchester orchestra, on your mark get set, robert mcdowell