Sometimes I have intentions for a post. I'll even start writing some of it, and then something happens.This is a post about a post that didn't happen. Although it's happening now. This almost sounds like a plot line to the TV show Lost.


I had been thinking a lot about Backmasking last week. Backmasking is a recording technique in which a sound or message is recorded backwards onto a track that is meant to be played forwards. The beatles were infamous in this tehnique, using it on a few different albums. It got to be though, that people were finding unintended messages on songs. Well, maybe Paul IS dead after all.

The reason I was thinking about backmasking was that I have a weird setup in my iTunes. I listen to a lot of music, to easily find them I sort by Date Added. Which normally works beautifully because whatever you recently bought or downloaded shows up at at the top of the list, and I need to peruse all this new stuff for ideas on what to write about for a post on the blog.

When you rip or download a cd, it adds the file into your library in the order of the tracks on the CD. Track 1 gets added the library first, then Track 2. But when you sort by Date Added, the last track is first, since it was added last. Which means that, if it takes me a few extra steps to listen to an album this way. I have to see what albums were recently added, settle on an album to listen to, then resort by artist/album and filter by album name. By this time all the tracks should be in their normal orders and I can begin listening.

Maybe this makes no sense to you because you are not buying and downloading as much music as I am. 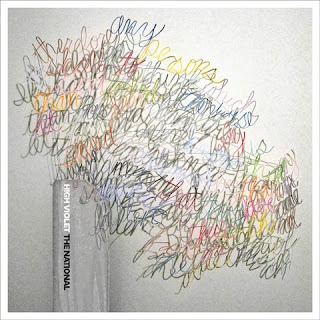 Either way...I don't like the idea of playing an album backwards...meaning playing the last track first and the first track last. I often will think I am being dumb about it...what does it matter. If an album is not considered to be a "rock opera" then it shouldn't matter what order I play an album.

Still, what if there IS a message in the order of the tracks...I would miss it. Even worse, what if there is an unintended message by listening to it in the wrong order? It seemed about as wrong has reversing a song to hear weird messages.

I wanted to use this idea of track order while reviewing the new album by The National for a post. The new album by The National, High Violet, was the kind of album that sounded like it had a message in it. I don't have any proof that there is a message in this album, but it seems like the dark sounding albums always have something sinister hidden. Even the name of the album had me thinking about spy code words or terror alerts.

As I started to put all this together I felt like I was stretching it too thin. It was a dumb idea. I think.