Vacation and a Large Popcorn! 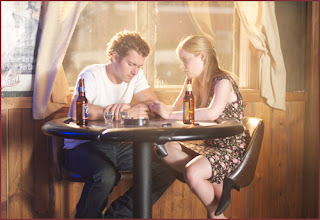 It needed to happen. It seemed like everything was against it happening. Schedules and stress made even planning the vacation a chore. The word of the week is inertia. It's what really keeps us from stopping to smell the roses. The inertia of work and everyday life makes it so difficult to change course. It must happen though. For the sanity of yourself and the health of your relationships.

Even a funeral threatened to take the train to relaxation off its tracks.

Three days in to some rest and a change in perspective, and I feel like I am returning to the person I remember I was. Hi Mookie! Meet my old friend George!

One of the main things that helped to spur a reason for some get away time was that TLO's high school friend is premiering her film at the Newport Film Festival. We are going to watch the film for the first time tonight. The movie is called NONAMES. Here is the description of the film from the official website for the movie.

Inspired by true events, NONAMES follows Kevin and his family of friends as they struggle within the confines of a small town. After his mother's death, Kevin decides to make a life for himself in his childhood home in spite of his father's decision to move. In the wake of tragedy, Kevin must end his extended adolescence or lose the things he holds most dear. Haunted by unsettled scores, it becomes clear that he must leave the town he loves in order to save himself from it. A new beginning is only a bus ride away.

They have picked some great tracks for the soundtrack of the movie: Dago, New Kentucky Quarter, Ronnie Hayward, and White Iron Band to name a few.

One track from the film that I especially like is a track from American folk singer Joe Purdy called "Too Young".

I met the producer/director/writer for the movie, Kathy Lindboe yesterday so that TLO could catch up with her and have a few drinks. She asked me if I thought I would cry during the movie. I told her that I cried during Cool Runnings, and that it's likely I will. I have to remember to bring a box of kleenex today.