Try this trick and spin it... 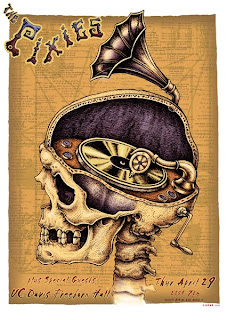 With your feet in the air and your head on the ground
Try this trick and spin it, yeah
Your head will collapse
But there's nothing in it
And you'll ask yourself

Who is Gobble Gobble? I dunno...I'm writing this as I understand it. All I know is that they covered, they call it molested, one of my favorite Pixies song.

"Where Is My Mind" is supposedly about being chased by small fish, but whatever...it's a song about losing your mind. It could be seeing giant Oreo cookies in the road while driving to a Grateful Dead concert with a head full of LSD. That might have happened to me, I'll never admit it though. One of my favorite parts of watching Fight Club is the final scene where this song comes on. Fucking great choice in songs for that scene.


Download GOBBLE GOBBLE - Where Is My Mind? (PIXIES BLASPHEMY)

Gobble Gobble seem to be a bit deranged. They have an unhealthy fetish for animated gifs and making music. They cite The Pixies as an influence and I think it shows in the reworking/covering (I really don't know how to define it...) of the song. It's got all the great elements of the song plus a healthy seasoning of elctro fuzz. It's a part of the White Guys with Beards Friends Vol. II Cassette Compilation that is also fantastic, and should be downloaded by you as soon as you finish reading this. (You should also pay for the pre-order of the physical copy...)

Where is my mind?
Way out in the water
See it swimmin’?

They are not the first group, and won't be the last, to cover this amazing song. It's been covered/remixed by The Toadies, Nada Surf, Emmy The Great, BassNectar, James Blunt, and Isreali musician Yoav: