Are you ready? HERE WE GO.

Isn't that what you want a CD to announce when you first hit play? Drum roll, and jive. And groove, and open with a voice that calls it out. And then gives you the idea that you might be able to sing along. 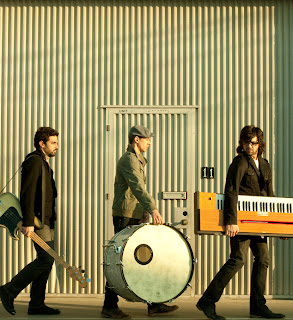 And there you have album gold. It's a simple formula. I'm almost glad I don't hear it often enough. And it's something you think you should hear from a five- or seven-piece band. But Crash Kings is just three men on piano, bass, and drums. It's gorgeous and delicious. And they don't stop giving it to you. Every song. Here it is kids we are going to rock it out. I love this CD.

Track 3 is called "It's Only Wednesday," which slapped me in the face two ways - the infectious music I was already telling you about, and then the lyrics... What did he just say? Damn. I wrote a poem called it's only Wednesday a few years ago. No, you don't get to read it. It's not like it was good. I don't think it was even finished. I'm just saying. It's things like that. Have you had a what did they just say?! moment of incredulity?

Anyway, this self-titled debut album has been out for nearly a year. Maybe you caught one or two of their tunes on the radio. Did you pay attention? Did the dj manage to tell you that you should be? Probably not. They never do. They have ad space to sell, and the advertisers want to hear Smashing Pumpkins and Red Hot Chili Peppers. It is what it is. But at least I'm here now to tell you you must own this album it will change your life.

Buckle in and get you suited up, it's time to fly.

If you need something a little stronger, just say so.

Yes, you heard right. Like I said above, the instruments used in this music consist basically of piano, bass, and drums. Why does it sound SO DAMN BIG?! Well, let me school you just a bit. There's such thing as a tube powered overdrive bass pedal. As in, vacuum tube. It really enhances the sound of the guitar plugged into it. He also uses multiple amps. Then there's the clavinet. Yep, a clavinet. It's still in the piano family - I think! - but it acts like a guitar. It's not a new concept, and unlike some bands we've featured here before... These guys didn't invent it. In fact, bands from Them Crooked Vultures to Phish to Miles Davis... Rolling Stones, Kansas, Pink Floyd, Sound Garden... You've heard a clavinet before.

You need to know more don't you. Well check out this video. You will be A-frakking-MAZED.

Now you know what's next.

The. Crash. Kings. YOU LOVE THEM DON'T YOU.

Great review! You couldn't be more right, this album is beyond FANTASTIC!!! I'd actually gotten into them a while back because I was amazed by that same video you posted so I took a leap of faith and immediately got the album. I was not disappointed at all, I listened to it over and over and over again on repeat and never got tired of it, I only loved it more with every listen. I recently got to see them open for JET (they kick just as much ass on stage as they do on the record) and had the pleasure of meeting them as well, they're really cool and gracious. They deserve to be the next big thing.

Thanks for reading Jess!