let me go out on a gurney

Shoegazing (also known as shoegaze) is a subgenre of alternative rock that emerged from the United Kingdom in the late 1980s. It lasted until the mid 1990s with a critical zenith reached in 1990 and 1991.

I was on the toilet reading Rolling Stone. When you write about music on a regular basis, you need to have multiple sources of influence and I try to keep a balance. I usually sit on the toilet, read all the new music reviews, and pick one, and only one of these bands Rolling Stone thinks I should be listening to, to check out. In my opinion it was an easy choice out of all the crap stuff mentioned this month. Even still, after reading this particular review, I was not sure what to expect.

"Tramps like us, baby we were born to die!" bellows Patrick Stickles on his band's second record. A Jersey rocker needs cojones to quote Bruce — and to make a concept album about the Civil War. Yet after an Abe Lincoln speech recited by Stickles' high school drama teacher (true to your school, dawg!), the band fires away, all martial snares, raging guitars and spit-spraying hollers, punk noise carved by folk roots. Lyrically, history and modern anxiety morph into freedom songs for an age where, then as now, "the enemy is everywhere," and neither whiskey nor "a pretty good GPA" will save you. But an album this excellent just might. (Three and a half stars) 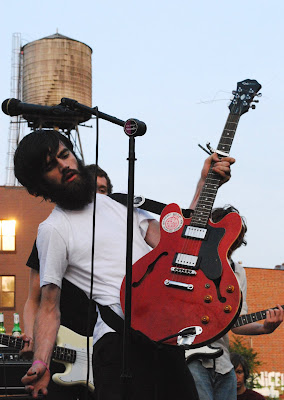 So...after finishing up on my throne, I sit in front of the trusty mac book and google Titus Andro... Andro...um...shit...I left the magazine in the bathroom...and I didn't want to go near there for at least an hour...