Which side of the ideas war are you on?

I have been on a remixing !KICK!! lately. Desperate to find a new project, I remembered that Trent Reznor had put up stems of a bunch of his tracks for users to remix and upload back to the site. It's remix.nin.com if you are interested. I decided to start a remix using Capital G and the beats from a Birdman track called Money To Blow. I think it turned out ok:

I was kinda stoked to upload it and share it with the NIN community. I log in...click UPLOAD A REMIX, and get greeted with this message:

IMPORTANT NOTICE: Due to lawsuits way beyond our control, we have been forced to restrict the functionality of this site in a very crippling way. Before any remix can appear on this site, it must be manually cleared by a moderator to ensure it does not contain any copyrighted material. Only once your submitted mix has been approved will it show up on the site. Please see the FAQ for detailed information regarding which materials are unauthorized for use in your remixes.
We are not happy with this process, but we have been left with no choice. Our approval process relies on the much-appreciated efforts of volunteer moderators, so it may take some time before your mix is approved. Thanks for your patience and understanding. We're as frustrated with this as you are, and we hope it doesn't interfere too heavily with the enjoyment of this site.

It's a shame, especially since no one is trying to make any money off this particular site or project. It's just lame and disappointing.

After reading that, I remembered a powerful documentary I watched several months ago but never got around to writing about. RIP: A Remix Manifesto. 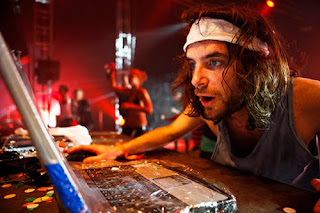 In RiP: A remix manifesto, Web activist and filmmaker Brett Gaylor explores issues of copyright in the information age, mashing up the media landscape of the 20th century and shattering the wall between users and producers.
The film’s central protagonist is Girl Talk, a mash-up musician topping the charts with his sample-based songs. But is Girl Talk a paragon of people power, or the Pied Piper of piracy? Creative Commons founder, Lawrence Lessig, Brazil’s Minister of Culture Gilberto Gil, and pop culture critic Cory Doctorow are also along for the ride.

I even wanted to get my cousin, a Copyright attorney, in on the post. I wanted her to watch it and for us to have a dialogue. Although supportive of me and this blog, what we do here must be at odds with her views on the issue right? At least from a professional point of view. Life gets in the way and I don't think she ever got around to watching this documentary...so no discussion. (I still want her to watch it. I still want to have that discussion. That's your last friendly reminder, cous!) But you, fellow readers, will watch it...Right? You can pay whatever you want to download the movie.

I had to force TLO to watch it kicking and screaming. I'm not sure why she resisted watching it. Maybe she hates documentaries. Perhaps she would rather watch The Kardashians. Most likely she has some guilt about what we do here on this blog. Giving away the work of artists we respect and enjoy isn't something we do lightly. We really try to do the right thing. We take down music at the request of bands and labels. We have only been asked to do so twice (well three times now, counting Friday) in a year and a half by the way. Not a bad record for the hundreds of MP3's we have made available for your perusal.

Once I got her inebriated enough that she had no ability to run away, I threw the DVD into the 'ole XBOX. I think she liked it? Maybe she will comment and share her views.

I am passionate about music. Maybe moreso about remixes, since I have been involved in DJ culture for a large part of my life. That's not the point though, not totally. The main focus of the film is Girl Talk after all.

What you realize through the first half of the film is that ALL music is built on the work of the past.

All ART is built on the art of the past. 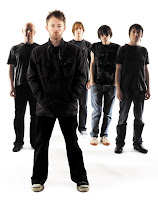 The entities that own this art will do whatever they can, namely suing the shit out of you, to protect it. These entities are in trouble though. Many big bands are producing and distributing their music without the help of these "entitities". Radiohead realized they no longer NEED a label. No longer on a label, they offered their latest effort In Rainbows to be delivered from the bands website and to allow the consumer/fan to pay whatever they thought the work was worth. This is like an atom bomb in the ideas war. It changed everything.

The label, in desperation, tried to legally pursue a fan who had decided to remix the album. The label no longer had rights to this new album, so the band stepped in to tell them to fuck off. Which they had to do, tail between. Then Radiohead upped the ante yet again. They offered the stems to Reckoner so that everyone could remix the song.

To lock up this art for the life of the artist plus 70 years stifles creativity or forces it underground. In the film, the director drives the point home in regards to the patents and copyrights involved in medicine. Could these laws be stifling the work on finding real cures for health issues in a timely manner because drug companies patent and protect all their work? Think about that for a minute.

Music might not "save" lives, but in the science world, this impacts us all in a very real way. The Rolling Stones' stealing all the great blues riffs from the past, but suing anyone else who steals riffs from them seems like a petty issue to some. But suing a drug company because they "borrowed" your scientific R&D to work on a drug to help cure cancer. That should hit home.

The filmmaker even puts the very documentary itself up for "remixing". You can take any part of the film and rework it, add or tweak the images in the movie as you see fit.

A participatory media experiment, from day one, Brett shares his raw footage at opensourcecinema.org, for anyone to remix. This movie-as-mash-up method allows these remixes to become an integral part of the film.

Support the film, and support your remixers.