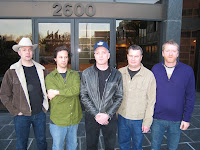 Do you know who is in Austin right now? The answer is Not Me. The tickets are just outrageously expensive. And if I recall correctly, getting a media pass required a few gymnastic moves that I just can no longer muster. Where does the money go, anyway? According to the blog posts from a few favorite bands, they apparently don't get compensated very well either.
In fact, the compensation issue compelled Camper Van Beethoven to come up with the idea of fan-sponsored songs just to make the travel and performance at SXSW doable this year.
Yeah... Camper Van Beethoven. Do you remember them? Or does the line blur between where CVB ended and Cracker began? Or do you think back and wonder whether that was a Wallflowers or Camper song that you loved so much that one summer?
"Influential" is one of the most commonly used words when discussing this 80's/90's alternative/punk/ska/pop/rock band. That's why you hear them in just about everything you ever listened to growing up.


Download Camper Van Beethoven - I Hate This Part of Texas

I hate this part of the night when the music Mookie has put on creates some odd reality within my dreaming brain. Fear not lovelies: podcasts will return soon, and Mookie can't wait to discuss this very topic.

But back to today's post. Camper Van Beethoven released albums throughout the 80's, disbanded in the 90's, and began to tour again in 2002. New Roman Times was put out in 2004 and it's actually a concept album. I don't totally translate the character's point of view in every song - supposedly it tells the tale of a disenchanted chap following his stint in the military - but at this point, it doesn't matter anymore. Now this album is simply something you need to make sure you have heard as you enter our most futuristic decade ever: if you want your hovercraft, you better remember from whence you came.

Who could be calling waking me from my dreams
Of John Paul and Ringo, and Keenan Wynn
(No George)

Check your collection... Have you got them all?