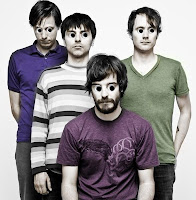 No, the title of today's post isn't unabashed obscenity for the sake of. It's an actual band. I had a chance to see these guys about four years ago when Holy Fuck were opening for Wolf Parade. Basically, this was full on instrumental sorta stuff that used whatever the band could find. Old beat up Casio keyboards, for example.

Well, come to find out that on May 11th, they will be releasing another full length, titled Latin. Chances are pretty good that you will like the album if you dig this first single, simply titled "Latin America". It's not too far off from where we've seen this band, so I'd assume that fans of theirs won't be too disappointed by their stuff. Here's "Latin America".

On a related note when it comes to obscenities in band names, another group that would probably pique the interest of some is Fuck Buttons. They released a gem of a single a few years ago titled "Sweet Love For Planet Earth", and the fucking song is epic. For real. I think I might've cried when I heard it first. Nah. Not really. I'm not that sensitive. So here's another dose of a band with 'Fuck' used well in the band's name.

Go buy some stuff and be a good American.