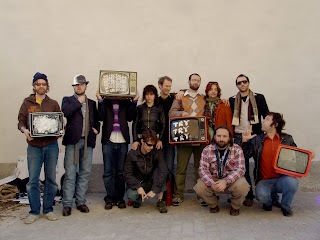 So everyone and their grandmother seems to be posting the new Broken Social Scene track "World Sick" that was put up online. Well good for you. You got the jump on me. Still, I think this is a great track from their forthcoming album Forgiveness Rock Record.

Anyhow, for anyone not all that familiar with this band, they are an odd sort in that it revolves mostly around a core group of members. The rest? Well, that all depends on the mood of the band, I'd guess. They've played shows with as few as seven members to as many as fifteen. If I'm wrong on the numbers? Please feel free to correct that.

Anyhow, their songs are many times on the verge of jam band-ish, yet it keeps more of the indie feel. Which is good to me, because I just can't seem to stand jam bands. Dave Matthews Band? Hate them. Grateful Dead? Ditto. Phish? Makes me want to punch myself. A lot. Personal preference, after all. So it seems odd that this group is one I've liked for a few years now. They're entertaining live, to boot. Their sound isn't really that close to the aformentioned groups, however, so it has a pretty refreshing feel to it all. Well, since you guys have probably stopped reading? Here's that tune. Go get that!

As an aside for a track this week, I just recently remembered a tune I have meant to post for a while. The track is "Velvet" by the band The Big Pink. Their one of the many from overseas that have started making a little noise in the underground here. This track? Well, it's for you if you like a lot of the electro tracks that groups like Depeche Mode were making in the '80s. Now, I am not comparing them to DM. Just a reference point and want to make that clear and avoid the flaming that sometimes happens with this stuff. It's a great tune, though, so just kick back and enjoy it.

Yes. Buy some stuff. It's cold. It's rainy. It's dreary up here in Boston. So I have no desire to put energy into making a smartass remark this week. I know. You're disappointed. Now you know how my family feels.