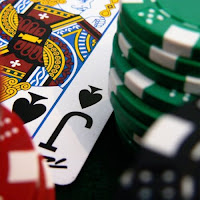 I don't think I have told you this yet, but I play poker once a week. Used to be a lot more. I mostly stick to poker tournaments, as I think the added level of strategy gives me more of an advantage. I have played in two World Series of Poker events in two different years. Both times I didn't make the first break because my rockets didn't hold up. Did you know the odds you get dealt pocket aces only 220 to 1?

A lot of people don't understand the intricacies of tournament poker. It's not about winning the most money like it is in a cash game. The chips you use in tournament poker don't stand for anything except keeping score. In a poker tournament those that are patient get rewarded. Cash game poker versus tournament poker is the difference between dedication and inspiration. Cash game play values steadiness, repetition, consistently making the mathematically correct play, showing up day after day and playing better than your opponents. Tournaments value "seizing the day." The ability to inspirationally find a successful play in critical situations is far more valuable in a tournament. There are times you step on the gas and times you just quietly fold away waiting your turn to attack. In both types of games though, this one fact is true: There can be hours of boredom around moments of excitement. It takes discipline to not get bored and play any hand. I have a tool to keep me from getting bored and playing bad.

Some of you could care less about poker, and I understand that. You are here for some music enlightenment and I have given you the poker equivalent of a "slow roll". Here is the tie-in. I listen to an enormous amount of media during these tournaments. I will usually play in these tournaments for 5 or 6 hours. During this time I listen to podcasts and music. I often load up my iPhone with potential albums to review for the site. 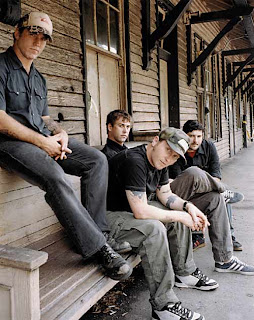 Sometimes those albums suck and I end up going through my albums looking for something to get me through. It was today that I rediscovered an album I love that I haven't heard in such a long time. Caution by the band Hot Water Music.

This album is 36 minutes of perfect punk rock. Is it something in the water in Gainsville Florida where this band, and many of my other favorite punk bands (namely Less Than Jake) originate from? I dunno, but this album saved my butt today. Sometimes it's not about keeping from being bored. Sometimes it's drowning out the Chatty Cathy at the table. I swear that some people play poker just to force 9 other people to listen to him or her. That's what happened today, and I was blissfully drowning that person out with loud punk rock!

The song that stands out most on this album is track two... Trusty Chords.

I hate this place but I love these chords
"an empty fate just means an even score"
And the pain this morning......
it filled my head
It's JAMESON.
It means that I'm not dead.

Jameson whiskey I presume? Tasty. But that's neither here nor there. That's an example of a great song. The entire album is fantastic. By the way, you might be wondering about the band's name? It's also the title of a Bukowski book. You have read Charles Bukowski right? That's a convo for another time and maybe another blog... (perhaps I am ready to create books.inALLcaps.com hmmm...)

This band rock! HWM is the shit ..

Cheers all way from Brazil!

Thanks for stopping in and dropping a comment! we appreciate it!

I recently came across your blog and have been reading along. I thought I would leave my first comment. I don't know what to say except that I have enjoyed reading. Nice blog. I will keep visiting this blog very often.