They'll remember me for my youth

"I mean, where do people go to find music these days?"

The same place we go to find everything else. The interwebs. That's why we bring you this blog. Or I suppose you could use Pandora. But don't make me rant about Pandora again. I know, I know. Everyone thinks it's the greatest thing since sliced almonds. Or sliced potatoes. Or whatever you all used to say. I admit I may have been a bit alarmist with these comments, but I was trying to prove a point. Can I get a hallelujah from anyone else out there who just can't seem to get HERRRD! (That's "Heard", with an urban accent. Hey, just trying to help.) 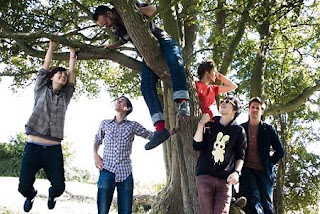 Back to the topic at hand. I have your new music for you. This band has been around for a few years but until last summer has only released lil' limited edition singles and such. Their first album, Reservoir, was recorded in the U.S. by the London-based band Fanfarlo, led by Swedish musician Simon Balthazar. The music throughout this entire album is just delightful. I mean delightful. You can clearly hear the use of mandolin, glockenspiel, and the host of other captivating instruments in the band's repertoire. In fact, the already-created instruments just weren't enough to round out the sounds that you hear. Musician Mark West created this tool which would create a magnetic square wave current which can be heard through the guitar when held near the guitar pickups.

He began calling it the Fanfarlophone after using it with Fanfarlo. He's no longer with the band; however, between the saw, the 30 acoustic guitars, trumpet, accordion, saxophone, clarinet... Whew! A beautiful, beautiful sound is put forth.

One of the slower, but more beautiful tracks on this album is #8, "If It Is Growing." Check it out below.

One of the fascinating things about Reservoir is how very dark the lyrics are, even though they are delivered in such an undisturbing way. You can use this music for whichever mood suits you. The other interesting aspect is the origin of the band's name. The inspiration comes from the 19th Century poet Charles Baudelaire's novella "La Fanfarlo", a complex story using irony and allegory and basically, just one of the better names that stood out while Balthazar found himself reading a lot of French symbolists.

Take a listen to the opening track, "I'm A Pilot," and if you can decipher the lyrics (Or if not, feel free to visit the lyrics page of their website), see if you can decide who Balthazar was channeling when he wrote it. You may be right.