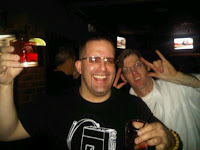 So I was out at a Haiti benefit Sunday night pretty randomly. Fun was had. Don't believe me? Check out the picture of me looking like a complete ass. George actually submitted it to This Is Photo Bomb, so I assume there's a bit of teh funnay involved.

Anyhow, there were a slew of DJs involved in this benefit. The next to last one I remember was playing a ton of old school - or as some call it, the Golden Age - hip-hop. So today's post is going to be filled with happy thoughts of old school stuff.

One of the forgotten groups from back when is Ed O.G. and Da Bulldogs. They're originally from up my way, in Boston. Roxbury, to be exact. Also the home of someone else later in this post. You'll have to keep reading to find out who, though. Anyhow, the first album, Life of a Kid in the Ghetto, produced two notable singles: "Bug-A-Boo" and "I Got To Have It". The latter is what I'm sharing here. A great bootleg remix of this was released by Peaches Music on their Jager Bomb EP.


Download Ed O.G. and Da Bulldogs - I Got To Have It

Another track, albeit a few years older, is by the Marley Marl Allstars. This one features a bunch of old school guys. Masta Ace, Craig G, Kool G Rap, as well as Big Daddy Kane. Not a bad collection, eh? Well together, they release one of the seminal hits of the late '80's in "The Symphony Part 1". Part 2? Forgettable. So Part 1 is what I bring you.

Next is probably the strangest man in hip-hop history. Well, at least when he was still part of the Ultramagnetic MCs. The man is Kool Keith, and some may recognize him from Dr. Octagon fame. Well, this track, I remember watching the music video and seeing Kool Keith in a straitjacket, and if I remember right? What looked like a bird cage on his head. Just fucking weird. Well, the mix in the video was the East Coast mix. The album version of this track doesn't come close to this one. So enjoy!

And the last one for today? Is the other Roxbury native I spoke of. His name in the hip-hop world is none other than Guru. While there may be better overall cuts by Gang Starr, this one is one of my personal favorites. Off of the album Daily Operation, this track shows the immense talents of DJ Premier, also. "Take It Personal" is a cut that simply talks of the world of betrayal, and I'm sure more than a few out there can relate to some degree with this song.

Yes. Support capitalism, too. If you don't, you're a communist sympathizer. I'll go resurrect Joseph McCarthy. And we'll come find you. Commie pig.