From Electro to Electro 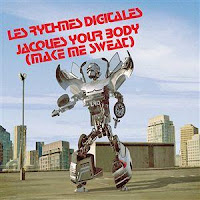 Well, today is more on the guy who is sometimes taking the moniker of the Thin White Duke. It's Les Rythmes Digitales. I thought of it when I was listening to the On The Floor At The Boutique by Lo-Fidelity Allstars. I have had that album since it came out back in '98 (or at least that's when I first laid eyes on it) and I still crack it out every so often. Hell, those of you who dig through our blog posts will find the Jackson and His Computer Band track "Makin' It Happen" on here. That's thanks to that same CD!

Well, LRD seminal hit "(Hey You) What's That Sound?" is on this disc, too. It made me wonder what else he's been up to and I have to say I found a couple of tracks that I had forgotten about! Now, I can't stand the group Justice. Sorry. They're chodes. I mean, there was that whole deal where they basically faked their live set. Although that could be doubtful, too. I mean, if you and I drank too much or sniffed a tad more than needed? We'd probably look like the picture below, also. I can see his reaction now: "Wait. It wasn't plugged in? Well. We still brought it proper."

Anyhow, LRD did a remix of Justice's "D.A.N.C.E." that's not all too shabby. And I fucking loathe the original. Whenever I hear the original? It makes me get in my car, drive to a local SPCA, walk up and down the halls of cages, pick the cutest puppy of the bunch, and kick it. Not really. And if you got offended by that? Shut the fuck up. I hear the low price guarantee at Wal-Mart does in fact cover a sense of humor, too. Here's the track.

Well, the man also did what I consider to be a great remix of Cassius' "Feeling For You". Much more housey and happy, and I could easily drop this in a DJ set. If I played any more, that is. So you get to drop it in your set instead. YAAAY!

Lastly is a remix of "Jacques Your Body (Make Me Sweat)", but this is the Switch remix. When Switch was still any good. Ugh. They split in two, and next thing you know, Switch turns to shit. Sorry, but Switch hasn't really made anything half-decent in the last two years. It's depressing, but I guess that sound can only go so far. Well, this is a remix I personally adore. So have at it and enjoy.

Now go buy this stuff. I have illegitimate children to feed.