So this is going to be more of a politically tinged post - and yes, with music. With laughs, also. If this post somehow made it to certain Republicans in the Senate? Well, I might be teaching the Irish jig down in Gitmo.

So Al Franken, we've been told, is just using his post to pass some outlandish things. I mean, according to some Republicans in the Senate? Attaching an amendment to a bill that holds people accountable for rape is just un-American. Seriously. Want proof? Below is a video on it. Not to mention the link I posted just above.

Man, I had some laughs out of some of the quotes those idiots laid out for us. My favorite, however, was by South Dakota Senator John Thune.

“I think hopefully he’ll settle down and do kind of the serious work of legislating that’s important to Minnesota.”

Yes, because protecting rape victims just isn't very important Mr. Thune. Well, let's take a look at Mr. Thune. Below is a picture of the guy. What stands out the most is the size of this guy's forehead. I mean, seriously. Look at it. 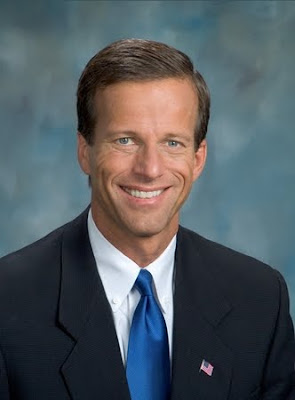 I mean, it's sort of ironic that his state is the home of Mount Rushmore. Because Mount Rushmore could fit comfortably on his dome. I have proof below. 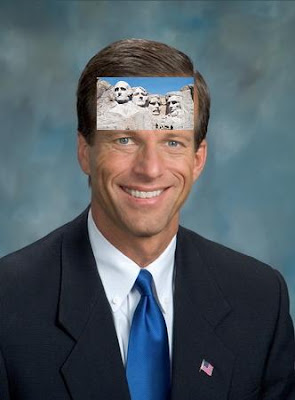 So I'll get to the music in a minute, because it's fitting for the topic at hand. I just had to share the letter I sent to this elected dipshit. I am curious if I'll get a response.

This is a quick note to tell you I applaud your courage. It's not every day that a man in such a powerful position can stand up to the temptation of using common sense. Your vocalization about the dangers that Al Franken has brought our country and its economy by protecting rape victims makes me want to stand up and salute not just one flag, but a few dozen. All at once. While draped in one. And painted from head to toe like one.

Because that's what a true patriot does. Defies logic and decency and shows women where their true place is. You, sir, are a true American hero. Never mind those that are dying overseas in a war that a chosen few with some silly stuff called proof have shown as illegal. No, they could learn from the book you clearly need to write. Because our country's literary history is that much less enriched because your words of wisdom aren't echoing in the ears of so many functioning illiterates.

Since much of your constituency may be lacking in a proper and formal education, you should instead release a series of coloring books. And in every picture where a Halliburton executive is violating a young woman, where that young woman's naughty spots are? You should have a gigantic picture of Satan. I mean, those things are MEAN. And caused these poor people to lose their minds and commit a sin. We know who the true victims are!

Regards (all while forcing others to salute our flag with me),
Walt Zink"

Anyhow, I promised that there would be music. Well, considering we're discussing rape, why not break out some classic Nirvana. Here's "Rape Me" from their seminal album In Utero. For added kicks? I've posted Richard Cheese and Lounge Against the Machine's cover of the song, also.

Go buy stuff. It's uber-American. If not, John Thune will eat your babies.

Awfull story, Thanks for sharing!
To be able to sign away your human rights in a contract, how is that even possible??? That is very very bad. I cant see that happening in Europe, but I guess you never know... Mat from Copenhagen..

Thanks for the post and the link Walt. Even if no one had even been affected by such a disclosure at any company, it still needs to be sanctioned. We sanction companies and countries for less than that.