King Khan rules over you 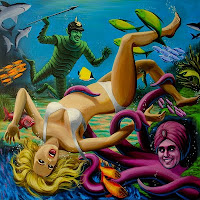 I've just recently discovered the oddity known as King Khan. Recently, on tour with BBQ (real name: Mark Sultan), the Khan was arrested for having certain fungi in possession. His tour manager was also arrested, having an invalid license.

No matter. They still make some quirky era-inspired tracks. Depending on whether he's working with BBQ as King Khan and the BBQ Show or with the Shrines (as, yes, King Khan and the Shrines), you'll get a pretty varied era-specific sound. Here's where I get to have the fun of sharing the tracks I like.

First up is what I think is the best of the bunch. It's off of the latest King Khan and the BBQ Show album entitled Invisible Girl. This is reminiscent of late '70's punk at its glorified high. Just think of the Ramones, and you'll get a good comparison. This track, "Lonely Boy" is loads of fun, and while only around two and a half minutes, packs a lot into it.

Next up is something hearkening back to the '50's off of King Khan and the BBQ Show's self-titled album. "Fish Fight" is a romp, and Chuck Berry is written all over this one. This is the sort of stuff that the Amazing Royal Crowns were going for, also, but the stripped down sound that these guys have makes it a big winner.

Lastly is from King Khan and the Shrines. This is really one of the only ones I dug off of What Is? and has a completely different sound from their usual '60's guitar inspired riffs. This makes me think of the Rolling Stones, and I think you'd clearly see why I think that. Rolling grooves and very mellow. Definitely a big winner.


Download King Khan and the Shrines - The Ballad of Lady Godiva

As always, buy this stuff. Or else turkeys will come by and smack you around a bit. They will! I swear!