I savour hate as much as I crave love 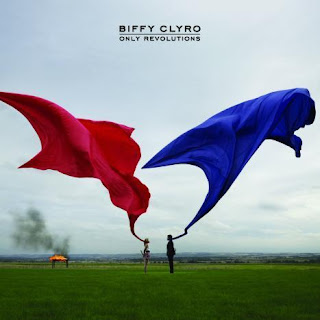 The Foo Fighters have disbanded for the foreseeable future and Blue October makes you want to cut yourself.

Ok. I got something for you... Biffy Clyro.

2007’s Puzzle was the record that caught my attention, but there were three albums before Puzzle that I had to delve into once I discovered the band. Blackened Sky (2002), The Vertigo of Bliss (2003), Infinity Land (2004) were the albums I checked out next. Lots of potential, if not a bit rough on the edges. Still, it was a band I needed to keep an eye on.

So I was stoked when Biffy Clyro released Only Revolutions early this November. The title, and maybe the message of most of the album, comes from the love story written by author Mark Danielewski

. The book, and Simon's recent marriage and experiences. He explains: 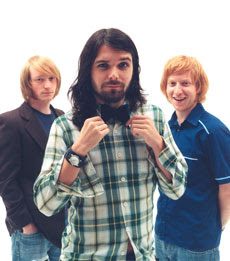 “I got married last year so a lot of the lyrics are about me and my wife,” he explains. “It’s kind of a relationship record in that sense and a record about life. The track ‘God And Satan’ for instance questions what’s there for us when we die. Everyone has lost someone close to them and whenever that happens you do start to question your own existence and you do start to think maybe there is no grand picture after all. But while we’re here, we might as well try and make people happy and make ourselves happy. It sounds defeatist but I’m almost happy that there is no happy ending. As far as I’m concerned your happy ending is happening right now.”

When I read this snippet from an interview with the band in Clash Magazine I immediately opened iTunes and played God And Satan.

The song opens with this lyric:

I talk to God as much as I talk to Satan cause I want to hear both sides.
Does that make me cynical?
There are no miracles and this is no miraculous life.

Don't take my word for it...Listen to it yourself!

Can you hear a little Grohl and a little Furstenfeld? I do. I think the vocals remind me of Blue October but the music makes me think of what I love about The Foo. The rest of the album is just as fantastic as this acoustic track. Josh Homme of Queens Of The Stone Age provides some shredding guitar work to the third track on the album. A song called Bubbles! It starts of poppy and ends up melting your face.

“We spent a lot of time with Queens Of The Stone Age when we toured the States and Europe with them and we got on with Josh really well,” says Simon. “We knew we’d be in LA recording so we said we’d give him a call. Sure enough he came over at midnight one night after tucking his kids into bed and played guitar on ‘Bubbles’.” “It was really cool and he really caught the gist of the song,” adds Simon. “I think he just listened to about ten seconds and he was like (adopts booming American accent), ‘I got it, I got it.’ It was total pinch yourself stuff and even now although he’s a really good friend, we’re still like, ‘It’s Josh Homme, I can’t believe we know you’.”

Biffy Clyro are about to go mainstream in my opinion. This is not a bad thing, but familiarize yourself with the old stuff

and the new stuff so that you can maintain your coolness with the other less informed people in your life.

Thanks a lot for enjoying this beauty blog with me. I am appreciating http://www.ukessaywritingservice.com it very much! Looking forward to another great blog. Good luck to the author! all the best!=)

This is interesting information and read it
http://www.911essay.com/

Been told some internet page benefit liquor the girl's mind-blowing fruit juice and luxuriate in almost any suffer a loss of coming from all and yes it, I'm certain you may have performed your famous higher education majoring with journalism but additionally couldn't needed to energy on the strength, or even cease that basically in someones spare time, the correct one for your requirements, you happen to be special!
essay writing service

I wish your article that I read all your articles in a single day. Please continue and keep on writing excellent posts.
Friv 2 | Kizi 3 | Yepi