A bit of a sidetrack on what to post

So I had a grand plan on what to post this week. After a long Sunday night in which I went to see "Little" Louie Vega play, I was dumbfounded by the number of songs I hadn't heard in literally years. However, as the typical man with a problem involving his attention span, that has changed. Last night I heard a track that made me rack my brain to find out what it sounded like.

The band Edward Sharpe and the Magnetic Zeros seems to have made quite the splash amongst the indie rock gods that be. Their strange overly melodic songs are reminiscent of a mish-mash of older artists ranging from David Bowie to Billy Joel to the artist I will make comparisons to here - Elton John.

The track "40 Day Dream" is the first off of their debut full length album Up From Below. It's an epic beginning to an album that signifies what the band is about. Full sound melding different genres in music ranging from folk to blues to rock. It's an unbelievable track, to say the least. It elicits quite the emotions from me, personally.

Well, when I first heard it, I heard the chorus as well as the tempo of the song, and I was absolutely kicking myself wondering why it sounded so familiar. It isn't that it's directly similar to the song I'm about to give you all, and I may also have been thinking of a different song. 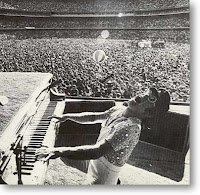 Well, I kid you not that I woke up this morning out of a total slumber having realized what it sounded like to me. I can't even say if it was my subconscious helping me while asleep, but that would be great if it was. The song I instantly woke up with in my head was Elton John's "I Guess That's Why They Call It The Blues", and I am going to leave everyone here with both to compare the two for themselves. All music is most certainly influenced by music of the past, so my comparison here is certainly not a slight against the band. In fact, it's quite the opposite! Enjoy!

And yes. Buy this stuff. If you don't, you will get a phone call from your mother telling you you were actually adopted. True story.

I agree, there is a striking similarity. But it's not a bad thing to be up there with Elton