And storms will surely come

There’s many who’ll tell you they’ll give you their love,
But when they say “give” they mean “take.”
They’ll hang ‘round just like vultures till push comes to shove.
They’ll take flight when the earth starts to shake.

Guitarist/lyricist/vocalist Dustin Kensrue has yet again provided a deep and resounding message in Thrice's sixth studio album, Beggars. In fact, this time around, they tweeted the entire recording process. Watch this video and check out what qualified as their "studio" for this album.

Yes, this entire album is completely an observation of the human condition, and it takes several spins before it really hits you over the head. This. Is. A. Masterful. Album. In the video above, Dustin touches on the fact that they've done a hybrid between recording live and recording piece by piece. The end result absolutely glows with all the energy of a live performance.

Dustin's voice carries a pure velocity. He means it. It just doesn't get much better than this. Check out "The Weight":

And what of the name of the album? I really enjoy the message he conveys through many of the tracks asking just who you think is in charge? Just what lies do you tell yourself so you won't have to do the right thing? And hey... You never hurt anyone. This means you've led a good life, right? 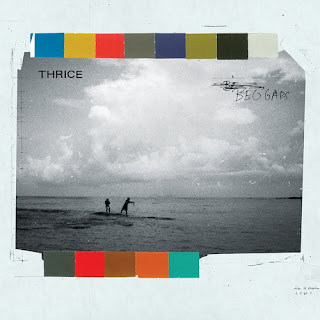 "I think we are at most times deluded in thinking that we are totally responsible for our circumstances, but in the end almost everything is beyond our control to a high degree and we can’t even be sure we will wake up tomorrow. Whether you believe that God created you for a purpose, or that the world is governed by blind chance, everything in life is a gift at its core; we are beggars all."

You must buy this album. It really hits the mark that Thrice has been trying to clobber all this time. I could write another entire post on the tracks "In Exile" and on "Doublespeak." Nevermind the fact that the title track wraps the record up beautifully.