Life ain't nothin but a dream
Realistic as it seems 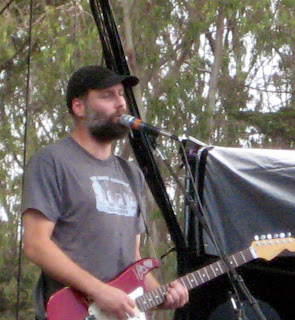 One of the most well known indie bands is still relatively unknown to many of my friends. It's necessary to get back to the original goal of this blog and to attempt to change that.

Boise is not just college football and potatoes. It's the home of the band Built to Spill.

The band has just released a new album and it's amazing. Although, you could pick up any one of Built To Spill

's 7 albums and get your mind melted.

Doug Martsch is the driving creative force of the band. Initially he intended to be the only static member of the band, promising to rotate musicians for each and every album. I always think this is a great idea, but I imagine this hardly ever works out. When you spend so much time touring and traveling in the back of vans and buses, friendships grow strong. Doug's plan didn't work out, but he now records and tours with some amazing talent that have become permanent members of the band.

I've been listening to the latest album, There Is No Enemy on constant rotation. Even while I sleep. It's woken me up in the middle of the night...holding my face amazed with the beautiful layering of guitars and the distinctive voice of Martsch and his amazing lyrics.

I have come up with many different ideas about the meaning of Martsch's songs. I am not going to share them with you. Why? Well let me share a quote from Doug's wife that sums it up: 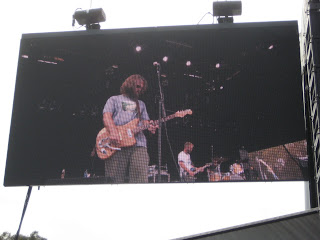 I once overheard Doug on the phone being interviewed. He sounded almost stand-offish in not “telling” an interviewer the meaning of a song or describing its origin. Doug and I have speculated about this sometimes: meaning (whether intended or not) is not inherent in lyrics or in any art. Listening, looking closely, and responding with one’s feelings, thoughts, and senses transforms. Doug simply does wish to disrupt any meaning someone else has found.

With so much work behind the band, the record is here. Now comes the album’s journey into the world. This venture Built to Spill does not map out. The record is yours to respond to.

[Editor's Note from The Little One: I think that sometimes people get one meaning for a song, but then they hear the next line and that throws them off. That might be what makes fans ask artists what the song was written about. So I am going to ask you now, just be OK with your interpretation of the song. Doug writes so many decent verses that you can take just one piece of the song and let it help you realize or reveal some truth or epiphany in your own life, your own understanding of love, politics, society, friendships, nature...]

Amazing track. That guitar work is so layered and stunning.

The thing about Built To Spill is that EVERY album is so DAMN good.

The Little One and I trip out when listening to the discography of Built To Spill. There Is Nothing Wrong With Love, for example is something we would have loved. It's such an epic and perfect album. Yet, it was a decade before I had heard it. What the fuck were we listening to in 1994 that we missed this gem?

Listen to this song off There Is Nothing Wrong With Love and prepare to play the shit out of it for months on end:

I'm glad that I will never miss another Built To Spill album. Seeing them live really solidifies my love for the band. You must listen to BTS and you must catch their live show. They are heavily touring in support of their latest effort. Check the tour dates on their myspace page to see if they are making a stop near you.

Email ThisBlogThis!Share to TwitterShare to FacebookShare to Pinterest
Labels: boise, built to spill, doug martsch, indie, life's a dream, martsch, there is no enemy

click my name if your interested, modest mouse and a lil' black keys influenced but not a copy cat.