A little happy stuff to make everyone feel good 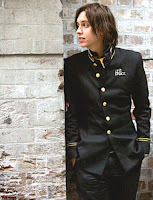 So I'm writing this feeling quite under the weather right now. And I would've loved to have posted a song that sort of fits that theme. The Edmonton band Shout Out Out Out Out just released their second album earlier this year, and I heard the track "Bad Choices" while leaving work last night. And loved it. It reminded me of their track "Chicken Soup For The Fuck You" off of their debut Not Saying/Just Saying. Hence the sick stuff reminding me to maybe post that song.

Well, I unfortunately couldn't find the latter, but the former, on their new album Reintegration Time, serves to help expose the band to more people, just as well. It's a beautiful track that reminds me a bit of Holy Fuck's "Lovely Allen" from 2007. Synth heavy and chugging along, you can't help but feel uplifted and afterwards happy by the continual upbeat feel. It's a winner for this year, for sure!

Next up is a track I'm not really sure about. Julian Casablancas - frontman for The Strokes - is set to release his debut album Phrazes For The Young next month. The first single, entitled 11th Dimension, is a catchy, but overall a pretty empty track. The solo careers by so many of these niche rock bands always seems to fall flat. It's not a bad track, but it's overly simplistic while trying to be a bit phony about some purported complexity to the song. Bad synth stabs can't really save this one in the long run. I want to like this track, but am very much on the fence on it.

Last up is a cover of a track I ran across a few years back, and am not sure what reminded me about it, but it could be due to all the talk I've come across involving Arcade Fire. This is a cover of "No Cars Go" by fellow Canadian Bryce Kushnier, otherwise known as Vitaminsforyou. I'm not sure what it is about this cover I love so much, but it could be that it is done in a very original fashion while still maintaining the original to an extent that doesn't trample all over the original. A great cover, and a rather unknown one to most, at that! Take a listen and see if you also like it.

That is it for this week. Again, please support these artists! Buying even one song you like sends a strong message that you really do support what they are trying to bring everyone!

Email ThisBlogThis!Share to TwitterShare to FacebookShare to Pinterest
Labels: arcade fire, holy fuck, julian casablancas, shout out out out out, the strokes, vfu. canadian, vitaminsforyou