I don't think Crosby, Stills, Nash, and Young had this much fun making a record or performing on stage. Maybe they did. But they didn't genre-bend like Monsters of Folk, who by the way even has a better name. 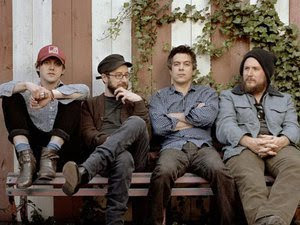 Monsters of Folk came to be when members of Bright Eyes, My Morning Jacket, and She & Him began playing together on tour, participating in jam sessions, and experimenting with different sounds and different personas onstage. And yeah, I am not the first one to compare them to that early 70's folk "supergroup".

As for the different sounds and personas on this self-titled album, which was released September 22 and sold enough records and digital downloads to hit #15 and #7 on Billboard's respective charts... You can hear some classic rock, folk, artsie bullshit, groovy blues, country twang, and oh yeah, folk. In addition, every member contributes on every instrument.

Say genre-bending with me again, and check out track 5, "The Right Place":

Wouldn't it be nice to be in the right place? To like where you live, what you do, what you see when you look at you, what you're sayin' when you open your face...

I don't think I will ever get there. What about you?

Anyway, none of their lyrics make much sense for long, and I guess today I am OK with that. "Baby Boomer" does a good job of encapsulating this "I have a stand, I don't have a stand, we all stand for something, none of us agree" sort of attitude.

Do any of us know what the fuck we are doing?

Email ThisBlogThis!Share to TwitterShare to FacebookShare to Pinterest
Labels: bright eyes, conor oberst, crosby stills nash and young, genre-bending, m ward, monsters of folk, my morning jacket, she and him