Form in an orderly queue outside your house

We just found out that Tenacious D has replaced The Beastie Boys at San Francisco's Outside Lands festival.

A lot of attendees are pissed.

Does Tenacious D belong at a music festival?

WHY THE HELL NOT? Can you imagine another way you could have THAT MUCH FUN? I caught a video of their live performance at Reading, and areyoukiddingmerightnow it's super very awesome.

Not that they are to be compared in any way to Tenacious D, but I think of this example because as I heard Track 9 of We Were Promised Jetpacks' These Four Walls this morning at 4 AM, I thought,

This is the type of song you want performed when you're at a music festival.

Take a listen to "Short Bursts" and see:

Glasgow. Yes, that's right. You're hearing a Scottish brogue. In fact, the Scottish Arts Council helped them with funding to get themselves over to SXSW this year. It seems there are no other festivals on the lineup at this time, but they will be coming back to the States for a tour this fall. 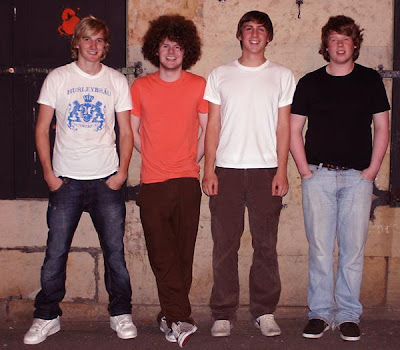 I'm loving them. These Four Walls is actually their debut album despite having formed a good six years ago. Each song is well thought-out, with all elements contributing from their proper place in the foreground or background of the track. And this is what makes up the energy that this whole album puts out.

Speaking of that energy, how about a love song that isn't slow and melancholy, but throws all those heartsick feelings into a power ballad of the indie persuasion?

That's right. Press play and enjoy "Roll Up Your Sleeves":

[Download We Were Promised Jetpacks - Roll Up Your Sleeves]

Roll Up Your Sleeves is one of two singles put out from this record. Don't wait and wonder if it's going to hit the frequencies here. Just buy the album, share this post with your friends, and spread the love. You have a new favorite band.